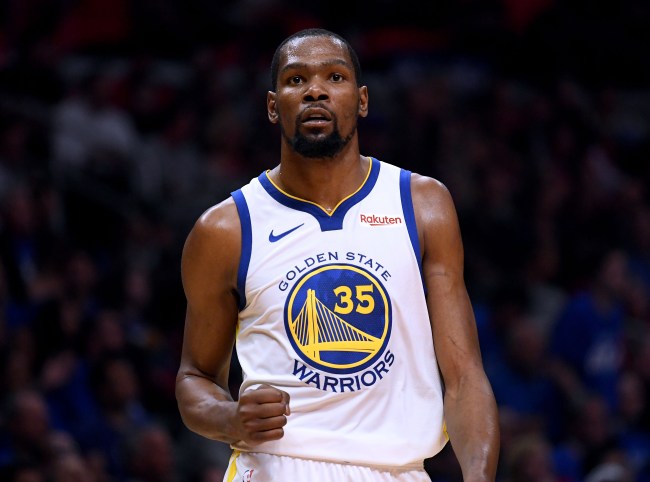 Kevin Durant sure has gotten salty with the media in the past few years, hasn’t he? The Golden State Warriors superstar might be winning on the court, but, off of it, he seems like an old dude who’s yelling “get off my lawn” to anyone with a microphone and a question — especially when it comes to his upcoming free-agency this summer. And, even with KD’s Warriors in the NBA Playoffs and destined to make another deep run to defend their championship for the second-straight season, Kevin Durant still can’t stop laying into the media.

In a detailed interview with NBC Sports Bay Area, Kevin Durant spoke about the “bad journalism” that’s been going on in the media regarding the speculation about where he may end up this summer. Durant even went as far as saying that the media “need” him to capture headlines and help drive readership because the decision is so big — which, obviously, is true. He should know that by now considering he’s one of the most polarizing athletes on the planet. Here’s some of what Durant had to say about his anger with the media, and some of the reports that have been written about him this season.

“They need me. If I wasn’t a free agent, none of this s–t would go on, right? None of this speculation about who I am, what’s wrong with my mental, why I’m miserable, why I ain’t happy with life. Nothing.”

It’s understandable that Kevin Durant doesn’t want to talk about free-agency in the middle of a season in which he and his teammates are looking for a third-straight title. Unfortunately, that’s part of what comes with the territory of being a pro athlete — especially one of his caliber. It also doesn’t help things when there’s internal fighting with teammates and back alley meetings with other players who might be trying to recruit Durant to go elsewhere. Sure, it can be a pain, but Kevin Durant should know how this whole media thing works by now, so it’s a dried up topic when he continues to complain about all the rumors floating around out there about him.