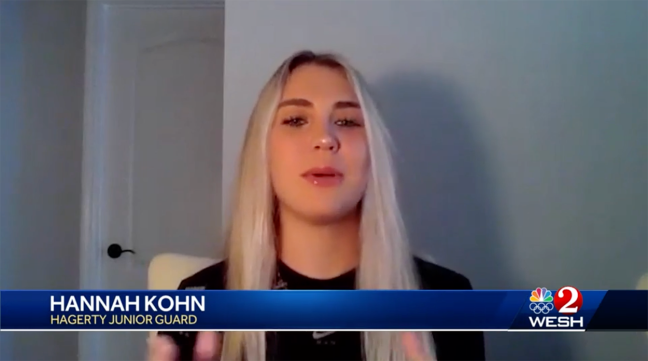 Hannah Kohn simply could not miss against Lyman High School on Wednesday. The junior shooting guard at Hagerty High School in Oviedo, Florida led her team to a 65-point win and set a national record in the process.

Kohn scored 61 of the Lady Huskies’ 88 points, which is just absurd. Of those more than five dozen points, 57 (!!) of them came from beyond the arc.

During the first half, Kohn knocked down 11 three-pointers. It was an impressive performance in itself, but she was not done there.

The ball continued to find its way to the hot hand and Kohn hit eight more triples in the second half to total 19 on the night. Her performance was historic.

According to the National Federation of State High School Association, she set new national record for the most three-pointers made in a single game. The previous record was 17.

Kohn added two more and her 19 treys were from all over the court. The range is unmatched. Literally.

Here is every single one of her record-setting buckets:

According to Kohn, her team was aware of the record at halftime. While Hagerty gathered in the locker room, someone looked it up.

Considering how close she was, and how on fire she was, the team gave her full support to go for it. They came together, decided that the record was well within reach, and got her the ball in the second half.

Alright @HighlightHER you got to check out @HagertyGBB @HannahKohn2 ! The Jr shooting guard made 19 three-pointers in a Tuesday night game. According @NFHS_Org that is the new record for the most threes made in a game in girls basketball. pic.twitter.com/cfV7XDL1vd

To put her record in perspective, it is nowhere near 19 on the NBA level. Klay Thompson set the NBA record with 14 threes made in 2018.

Insane stuff from Kohn, who hopes to take her game to the collegiate level. If she keeps playing like she did on Wednesday, she will have her choice of where to play.