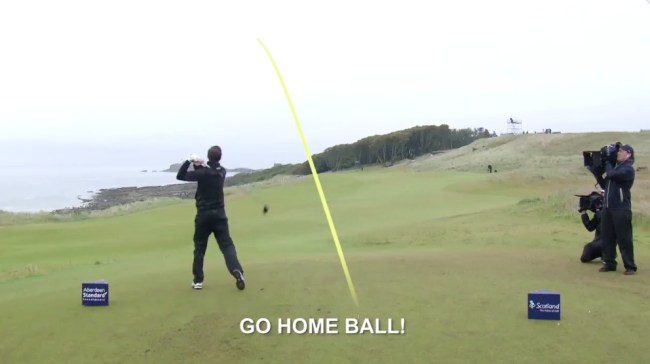 I’d be pretty shocked if you’re reading this post and you’ve never seen Happy Gilmore, but if that’s you then I am sorry.

Everyone that has seen the Adam Sandler classic has 100-percent tried the Happy Gilmore run-up swing while playing golf or beating balls on the driving range, it’s just a fact.

The European Tour put some of their players to the test over in Scotland this week in a closest to the pin challenge with the only catch being they had to pull off their best Happy Gilmore swing.

Jimmy Walker may be the only recognizable face in the video, especially for Americans, but nevertheless, the video is entertaining. Hell, the Happy Gilmore swing is funny if a 4-year-old is doing it or an 84-year-old is doing it. These guys make it look easy because trust me, hitting a golf ball while sort of jogging towards it sideways is absolutely not easy. Some of the guys even top it, so there ya go.

How about Walker hitting one to 12-feet and presumably saying ‘take that, f—–s.’ Is that a well-known thing that Walker cusses like that? I don’t think it would have surprised anyone to see him hit it, stare at the result and give off a grin, but ‘take that, f—–s’ works too.

The European Tour is always cranking out fantastic content on their social media channels. The guys always seem to have a good time in each video and I’ve yet to see one where I don’t at least have a laugh or shoot it over to a buddy to make sure they see it. Hats off to them, they’ve got it going on.

The European Tour is at The Reneissance Club for the Scottish Open and big names like Justin Thomas, Henrik Stenson, Rory McIlroy and co. are partaking as they get set for next week’s Open Championship.