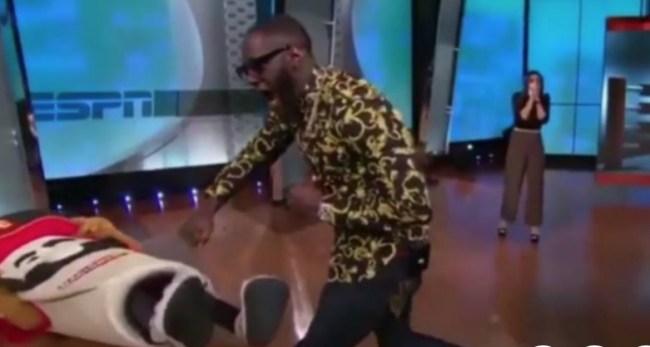 Heavyweight boxer Deontay Wilder, who has 39 professional knock out wins to his name, is easily considered one of the hardest punchers of his generation.

While promoting his December 1st fight against Tyson Fury, Wilder went on the Spanish language ESPN show the ‘Nacion and for whatever reason the hosts had Wilder punch a mascot square in the jaw.

WATCH: Deontay Wilder punches a mascot, not realising there’s a person inside, and breaks his jaw. pic.twitter.com/v1kcThREiA

Update: ESPN reps have spoken to the wrap and said the mascot did not suffer injuries despite initial reports

WBC heavyweight champion Deontay Wilder apologized Sunday after it was widely reported that he broke an ESPN mascot performer’s jaw on live TV. But the 40-0 boxer can rest easy: ESPN says that the performer is just fine.

“Reports are innacurate. No injury was caused to the Mascot performer during the Nación ESPN segment,” an ESPN representative told TheWrap on Sunday.

Earlier this month, Wilder sat down with Nación ESPN’s Adicto al Boxeo to talk about his upcoming title-defending bout against British boxer Tyson Fury. Near the end of the segment, Wilder was invited to take out his impatience to get the fight started on a BOB punching dummy brought out just for the occasion.

@BronzeBomber recently appeared on the @ESPN show ‘Nacion’ to promote his upcoming fight against @Tyson_Fury, and part of his appearance included a scene with a giant mascot tortilla in a sombrero. pic.twitter.com/xhctDNOD4T

I’m not entirely sure how Wilder didn’t know there was a real person inside the costume or why the producers would allow this to happen but it’s still hilarious.