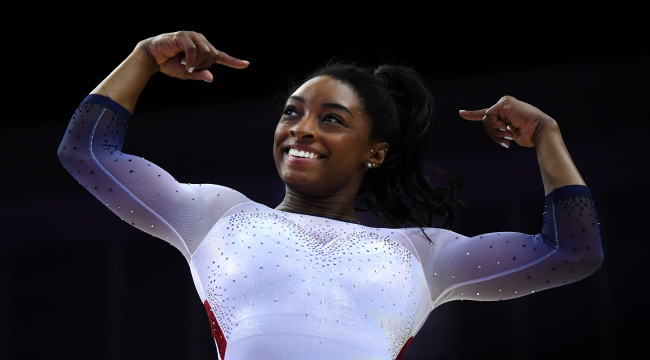 Former UFC bantamweight and flyweight champion Henry Cejudo, unlike many athletes in the world of sports, doesn’t think Simone Biles should be pulling out of all her Olympic gymnastics events.

Cejudo, who is the only person to win an Olympic gold medal and a UFC championship, winning gold in freestyle wrestling at the age of 21 at the 2008 Olympics, says all Biles needs is a little “tough love” and a “kick in the arse.”

“I believe Simone Biles pulling out of this thing is like, I think she really needs to check herself,” said Cejudo, who at the time of his Olympics win was the youngest American to win gold in wrestling. “I think there’s time for a little bit of tough love. ​​If she was my sister, this is exactly what I would do,” said Cejudo. “So, I would never say something that I wouldn’t do to my personal family or anything like that. Or even for me, because I do believe sometimes we do need a nice kick in the arse.”

He then added, “People say the media created her and you know they put upon this pressure. Not really. They only give you a platform, a limelight. It’s up to you to believe it and to accept it. If you start to think you’re the GOAT and the greatest of all time, then that’s on you.”

Many fans agreed with Cejudo’s take on Biles’ withdrawal from Olympics events.

If she has a goat 🐐 tattoo! Nooombre brah 🤦🏽‍♂️ , she has to put up or shut up! If she talking the talk she has to walk the walk

Preach brotha!! I deal with mental health issues, have PTSD from Afghanistan and you are 100% correct even when we are down we need someone to push us to be better and stronger

Nothin but facts from the gold medalist and simultaneous 2 division UFC champ !! 😎🥇👑

While many more people on Twitter thought what Cejudo said was dead wrong.

Guy with ONE Olympic medal mentors girl with 6. Outstanding... pic.twitter.com/xP1HrlkYZh

Simone Biles has a record breaking 6 Olympic Gold Medals.🥇
She doesn't need to prove a thing to you, me or herself. That she pulled out to open the door for her teammates only shows she is not full of herself.

Do you even know what twisties are? She was having them, and it’s super dangerous to keep competing with that.

…”the twisties” are not be to played w/ mid-air. When one considers the dire consequences to the spinal cord after getting lost in the air—I see parallels 🧠 between Simone & Rose🌹 after her 1st fight w/ Andrade. Unlike MMA, most don’t appreciate the risk gymnasts take ✊🏼

Respectfully, this is not a tough love kind of moment. She has a condition that came on after she got to the games which prevents her from knowing where she is mid-air. As high as she soars it would be insane to attempt any of it when she’s not in complete control of her body.

USA Gymnastics has confirmed that Biles will participate in the balance beam final for her country on Tuesday after withdrawing from the vault and uneven bar individual competitions over the weekend.