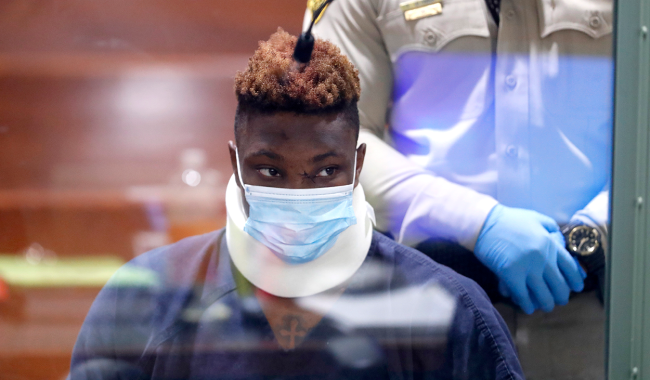 Earlier this month, former Las Vegas wide receiver Henry Ruggs III was involved in a serious car accident while driving with a blood alcohol level at least twice the legal limit. The crash not only injured Ruggs and his girlfriend, but it killed the driver of the other vehicle and her dog.

A funeral was held for Tina Tintor last week after the tragic incident and Raiders owner Mark Davis was in attendance. Meanwhile, Ruggs is facing a significant amount of time in prison.

Ruggs was reportedly traveling 156 miles per hour just moments before the crash and was charged with driving under the influence resulting with death, as well as three other felonies and a misdemeanor. He is currently out on $150,000 bail.

Clark County district attorney Steve Wolfson said that Ruggs will serve at least a mandatory two years behind bars. He could get more than 50 years if he is found guilty of all charges.

Because he posted bail, Ruggs is home. He is on house arrest with strict conditions as his criminal case proceeds.

Allegedly, while out on bail, he has been playing a lot of video games.

Specifically, he was believed to be caught online playing NBA 2K.

Henry Ruggs playing 2K while out on bail pic.twitter.com/ys51y5DQQm

Although it is not confirmed that Ruggs was the person playing the game, his gamertag is listed as “RuggsIII.” That, of course, would lead to the assumption that Ruggs was on the sticks, playing NBA 2k, while out on bail.

Ruggs’ actions, if it is in fact him, are not illegal. However, when he should likely be doing everything he can to keep a low profile, it is odd.