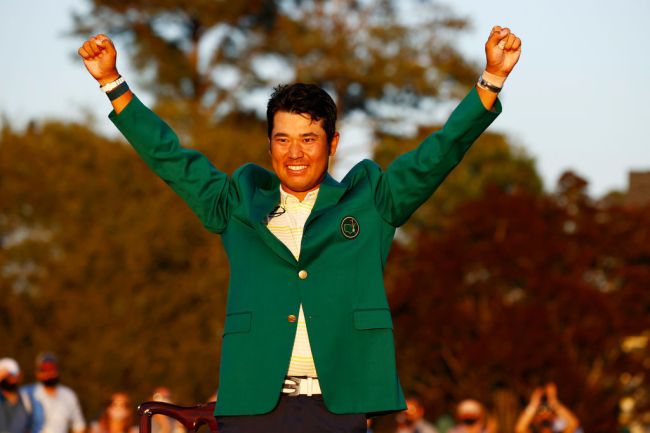 A lot happened in Hideki Matsuyama’s world on Sunday. Not only did he become $2 million richer by winning the Masters, he also became Japan’s first male player to win a major. He’s now very much so a living legend. ESPN’s Andy North and others have even suggested his win could be worth $1 BILLION when it’s all said and done.

The 29-year-old isn’t letting any of that get to him, however, he’s still being laid back Hideki as photos made the rounds on Twitter Monday morning of him walking around Atlanta’s airport with the green jacket draped over his arm. He even just threw it over some random chair at his gate while he waited to board his flight.

The fact that Hideki is handling his green jacket the same way I handle my $9.99 sweater from TJ Maxx when traveling is epic.
(@bryanptak @RiggsBarstool) pic.twitter.com/OPlNwjaXoQ

At the end of the day, the jacket is just a jacket, but it’s still a shock to the system to see a Masters champion just walk around with it like it’s a bootleg Supreme hoodie. You also have to love the ANGC hat he’s wearing, which he 100% purchased in the gift shop earlier in the week.

Just imagine the reaction from the snobby crowd at Augusta National when they realize Matsuyama definitely just tossed his green jacket in some nasty security bin in the airport.

Matsuyama deciding to jump on a 6:45 AM commercial flight in Atlanta is quite the play as well. The drive from Augusta to Atlanta is every bit of two hours so he either made the trek after the green jacket ceremony on Sunday or him and the boys may have pulled an all-nighter and made the trip in the early hours Monday morning.

Matsuyama gained a lot of fans with his win at Augusta National and this nonchalant vibe he’s putting out at the airport is only going to drive those numbers up. You can’t teach these sorts of power moves.