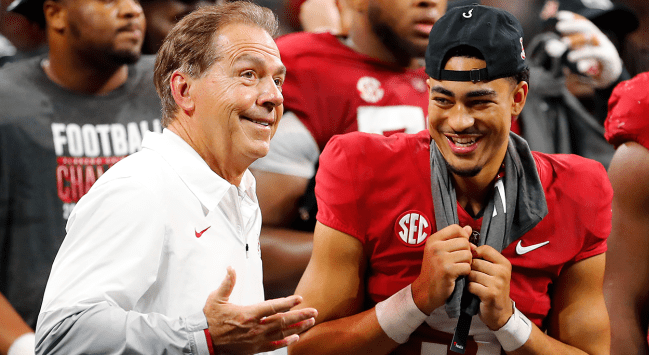 Nick Saban has caused every SEC fan that doesn’t pull for the Crimson Tide some form of pain over the years. One young man is sick of seeing Saban and Alabama dominate the SEC, so he showed up to the SEC Spring Meetings this week with a plan.

The SEC Spring Meetings aren’t like SEC Media Days where quite literally anyone can show up to the event. Coaches, athletic directors, and SEC administrators are there to discuss things amongst themselves and not answer ridiculous questions from various media members.

Getting into these meetings is a task in and of itself, but one high school junior was able to sneak by security and have a little chat with Saban. He also came prepared with an offer for the head coach.

According to Trey Wallace of Outkick, who spoke to the high schooler, the kid snuck past security and offered Saban $5,000 to leave Alabama.

The kid doesn’t want Saban to retire from coaching, however, he wants him to return to LSU.

“For the pain he’s given me for the past twelve years,” the high schooler said, explaining why he wanted to talk to Saban. “January 9th to 2022, he has given me so much pain. I go to the LSU-Alabama games, I sit there in the 4th quarter, LSU is up and I think this is the year and then I just see Saban just run away with it.”

“I respect him, I respect everything he does, I love his process, I love everything about him. I just can’t stand losing to him.”

Unfortunately for the high schooler and all LSU fans, Saban didn’t take the $5,000 offer. Saban joked about it afterward, however, saying “he was a cute kid.”