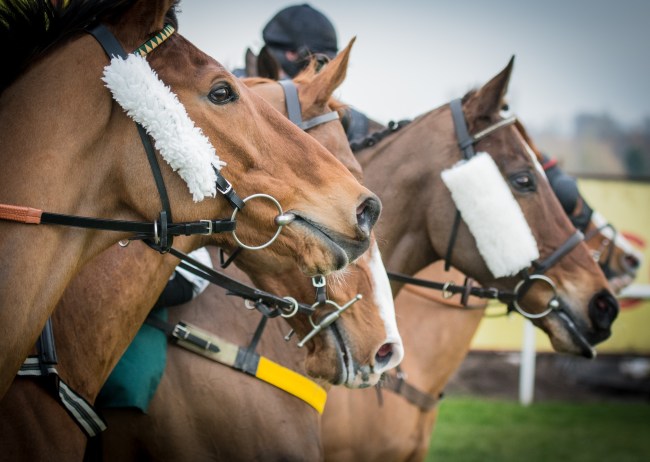 Despite everyone in my family having to wear eyeglasses and having messed up eyesight, I’ve somehow made it this far in life with perfect 20-20 vision. Across the five senses, it’s probably the best thing I have going for me at this point. And in spite of having perfect eyesight, I was still mindfucked by this photo finish.

I’ve been to my fair share of horse races too. I was in the stands at the Belmont Stakes when American Pharoah won the Triple Crown and had a perfect view of that runaway finish. My uncle’s cousin is Steve Cauthen, the youngest-ever jockey to win the Triple Crown of Horse Racing when he won it on Affirmed in 1978.

I grew up around horses, and I’d like to think that I can at least process what’s happening at the end of a race, especially when I’m presented a still image of the photofinish. Still, I was just as stumped at the race officials on this one.

At Kempton Park in the United Kingdom, Loving Grace was initially named the winner after officials reviewed the photofinish only to have that decision reversed and Albadr named the winner upon closer inspection fo the photograph. Can you see what’s happening here?

Here is the photo finish – Albadr (near) was initially placed second behind Loving Glance before being awarded the race at Kempton pic.twitter.com/Ft8YQVSmBG

They've got that Kempton photo wrong, haven't they?
Loving Glance's nose was the one at the bottom, which makes her the runner-up shurly

This photo from today’s meeting at Kempton is causing all sorts of discussion in the studio. Without looking it up, who was declared the winner? For what’s its worth, the judge got it wrong the first time around pic.twitter.com/ShIm1VkTJv

You'd definitely call Loving Glance the winner when you look at it first. https://t.co/LtRt0MGEJh

Here’s the highlighted portion that you need to see in order for your eyes and mind to properly process what’s going on in this photograph:

Albadr – red outline… clearly won when highlighted like that but close at first glance… pic.twitter.com/QacdpYPhNy

The result of the 3.00 Kempton has been amended with Albadr awarded the race having initially been placed second behind Loving Glance in a photo finish

If I’m a bettor in the stands and I’m told that my horse won after a photofinish review only to have that REVERSED after the fact then I’m pisssssssed. Not that they should’ve let the wrong result stand, they just should’ve gotten it correct the first time around instead of giving false hope to the local gamblers.

I don’t know why but this made me miss those Optical Illusion books from the early 90s that used to be in every home in America. We as a society don’t spend enough mindless time looking at optical illusions anymore.