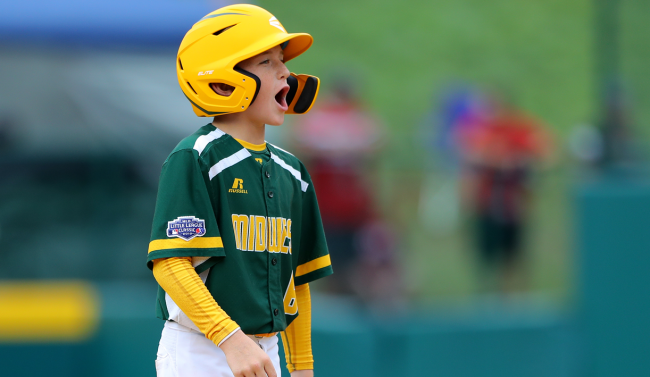 There is a reason why over two different runs and 92 episodes there was a show on TV titled Kids Say the Darndest Things. It’s because they do.

Never was that more evident than on Saturday during a Little League World Series game on ABC. It occurred during the elimination game between Iowa (Midwest Region) and Washington (Northwest Region).

In the sixth and final inning of the game, with Iowa holding a 6-3 lead and just one more out to go for the big win, the Washington batter worked the count to 3-2.

On the next pitch, Iowa thought they had secured the victory with they believed should have been a called third strike for the final out.

Instead, the LLWS umpire called the pitch a ball, sending the batter to first base and bringing the tying run to the plate.

Sensing his team might be a little rattled, Iowa’s manager called time and headed to the mound to talk to his team.

As he reached the kids, one Iowa player could be heard on the manager’s hot mic repeatedly saying that the umpire only called the pitch a ball because of ESPN and their desire for drama.

“It’s for ESPN so they can come back. That’s because ESPN likes it, it’s all ESPN,” shouted the Iowa player.

Naturally, the very next pitch after the mound visit was a curve ball that was called a strike – yet was clearly not as a good as the pitch that umpire had just called ball four.

The broadcasters of the game, Karl Ravech, Kyle Peterson and Jessica Mendoza, all basically ignored the player’s accusation against their employer other than Ravech who did point out that the first pitch after the walk was “more off than the ball four.”

Iowa would go on to win the game shortly thereafter when one of the Washington players got caught in a rundown after a wild pitch. They would go on to defeat the Mountain region team 10-2 on Sunday. Their next opponent in the 2022 Little League World Series will be the loser of Monday’s game between the West and Southwest regions.