THIS IS MARCH! Houston Hits The First Buzzer Beater Of The Month To Beat Memphis In Crazy Fashion 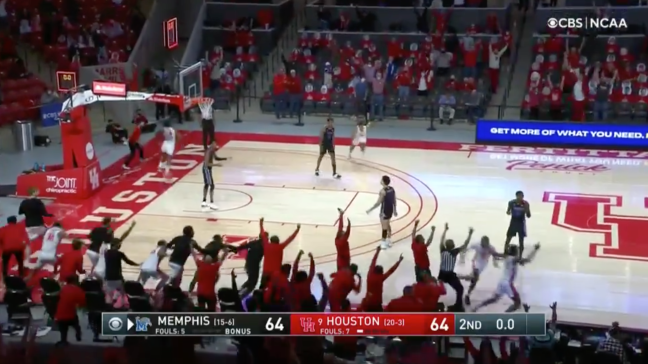 It took seven days for us to get the first buzzer-beater of March 2021. The madness has officially arrived, as Houston and Memphis played out one of the crazier finishes in recent history on Sunday afternoon.

The ninth-ranked Cougars hosted the Tigers with hopes of securing a top-three seed in the NCAA Tournament, while the visitors hoped to keep their season alive and move firmly toward the “in” side of the bubble. It was a back-and-forth battle throughout the first 39 minutes and 50 seconds and the game came down to the final 9.3 seconds.

Memphis was down three with a chance to send the game to overtime if it held for the last possession, and that was head coach Penny Hardaway’s intention. He dialed up an in-bounds play that saw Lester Quinones take a contested shot from beyond the arc with eight seconds left off on the clock. His poor attempt was off the mark, but the Tigers got the rebound and kicked it out to Boogie Ellis for the clutch game-tying triple.

It was a crazy sequence that would have made for a great finish to regulation, but unfortunately for Memphis, that was not the wildest shot of the game. With 1.7 seconds left, Tramon Mark caught the inbound pass at half-court and sent up a prayer before the clock hit zero. The heave banked off of the backboard and went in to give Houston the win in unbelievable fashion.

Here is a baseline angle of the insanity.

THIS IS HOW THE MEMPHIS-HOUSTON GAME ENDED!!!!

With the win, the Cougars are all-but guaranteed to be at least a No. 3 seed in the Big Dance. With the loss, the Tigers may be on the outside looking in.