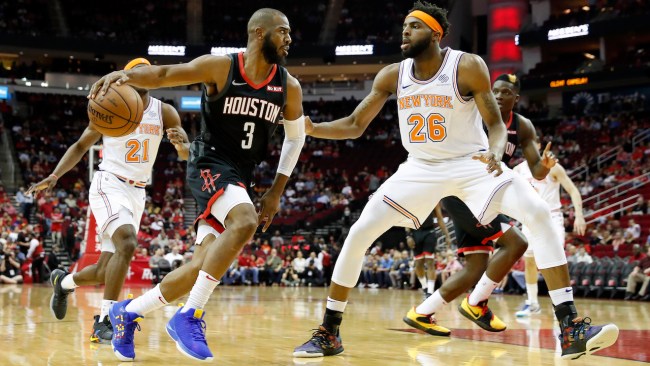 As any basketball fan will tell you, what makes the NBA such a fantastic league is that its off-the-court storylines occasionally rival, if not surpass, the drama of its on-the-court action.

Trades, free agency, the draft, the social media shade, the late night arrests, the girlfriends, there’s just something about the National Basketball Association that excels at creating intrigue outside of its main product, the sport itself.

And at this given point in the NBA timeline, there is no team that is more entertaining when a ball isn’t being dribbled than the Houston Rockets.

The Rockets, still reeling from their Game 7 loss to the Warriors two years ago, are currently in the midst of some serious internal turmoil, as Mike D’Antoni is heading into the season without a contract, and Chris Paul — who reportedly can’t stand James Harden — is another year older and brittler.

CP3 demanded a trade and Harden told the front office to choose between them after losing to the Warriors, per @VinceGoodwill pic.twitter.com/CWzliJIYUe

And while the Rockets are desperately trying to unload Paul for any semblance of a decent package, his hilariously bloated contract — he’s owed $123 million over the next 3 years — will likely make any sort of trade deal impossible.

That didn’t stop the Rockets from trying to swindle the Knicks, arguably the league’s most pathetic franchise, into taking Paul, who will be due $44 million during his age 37 season.

Included as a throwaway line in his analysis of the Mike Conley trade, The Ringer NBA reporter Kevin O’Connor said that while the Houston Rockets tried to trade Paul to the New York Knicks, the league’s most moribund franchise wanted no part of him.

“The Rockets recently explored trading Chris Paul into New York’s cap space, but the Knicks refused, according to league sources. [The Ringer]“

Given the apparent blink-and-you’ll miss nature of O’Connor’s tidbit, it’s unlikely that the two sides ever remotely came close to striking a deal.

However, the fact that the Knicks — the New York fucking Knicks — were smart enough not to pull the trigger on Paul shows just how low his trade value has sunken.

And if you can’t convince the idiot in the room to trust you, then who will?