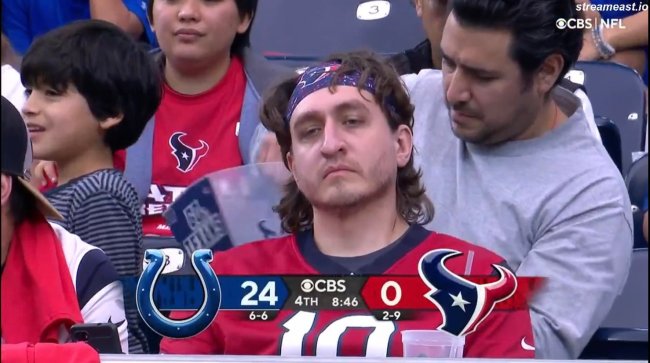 The Houston Texans are terrible. At 2-10 through 12 games, they are tied for the second-worst record in the NFL with the Jaguars and only the Lions are worse— by one win.

As a result of the poor on-field performance, absolutely nobody is showing up to the games. For Sunday’s home game against the Colts, there may have been more players and staff in the building than fans. It was, at the very least, very close.

Fans were certainly out-numbered during warmups. The parking lot and the stadium were empty. No tailgates in sight.

Unrelated, the Texans fans are really pumped for this game. /s pic.twitter.com/iNugFHXHjG

The same could be said about kickoff. NRG Stadium was barren.

15 minutes before kickoff and this place is ROCKIN.

Those who did choose to make the trip to Kirby Drive might have wished that they just stayed home. Indianapolis shut Houston out 31-0 and it was never even a fight.

Texans quarterbacks Davis Mills and Tyrod Taylor went a combined 11-of-27 for 94 yards and one interception. Running back Rex Burkhead ran the ball eight times for 30 yards.

Houston managed only 141 total yards in 18 minutes and 25 seconds of possession. Meanwhile, the Colts scored a touchdown in every quarter with 389 yards in 41 minutes of possession.

It was ugly from the start and it never got any better. As a result of the loss, the Texans became the first NFL franchise to be eliminated from the playoffs this season.

And as the game went on, fans were very, very sad.

Nobody can blame this man. His team is terrible, there is no hope for this season, and there is very little hope for the immediate future.