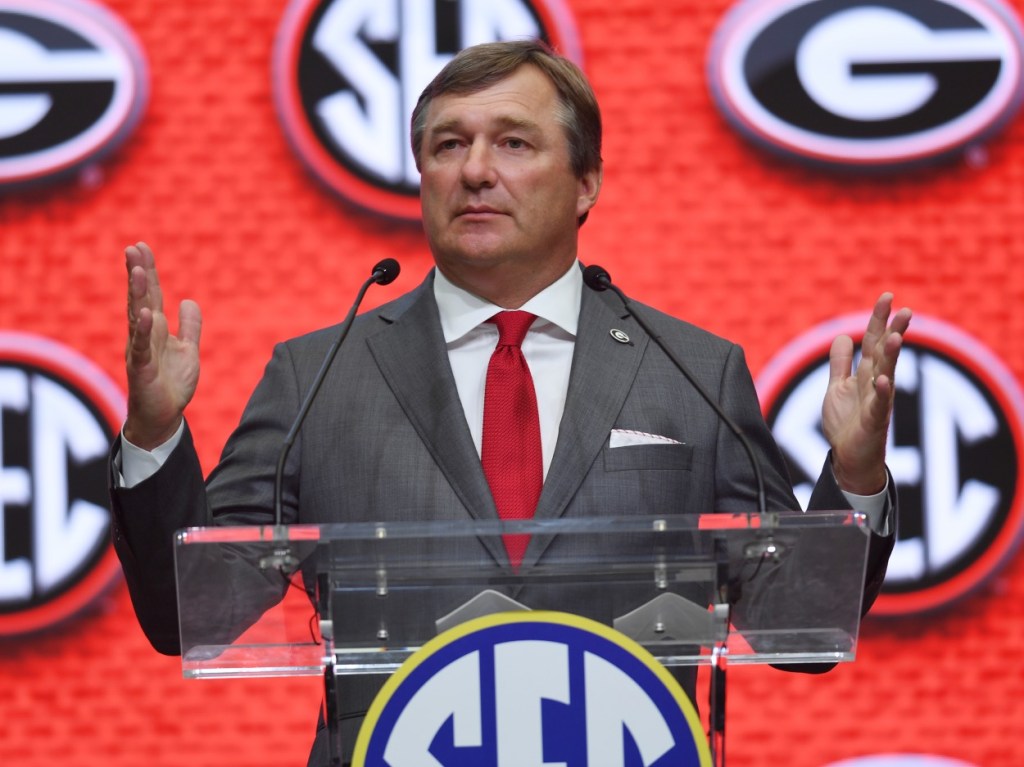 The Georgia Bulldogs enter the 2022 College Football season as the reigning National Champions. This is a role the Dawgs haven’t experienced in 40+ years, long before any of the current Georgia Bulldogs players were even born.

University of Georgia Football head coach Kirby Smart is no stranger to this position. He has already won 4 National Championships as Defensive Coordinator of the Alabama Crimson Tide. So he’s already devised an interesting way to protect his players from the praise as they enter a new season as the champs.

Because let’s face it, when you are the champs people let you hear it. Everywhere these Georgia Bulldogs players go in the state of Georgia they’re hearing congratulations from fans. Even the players who mostly keep their heads down and train are still hearing those barks from someone somewhere. But Kirby has a plan to keep his Dawgs hungry, something he talked about on ESPN’s Marty & McGee.

How Kirby Smart is keeping his Georgia Bulldogs players hungry, and getting them to block out the praise after last season.

Here is Kirby’s quick interview along with his quote below:

Kirby Smart: “I told our players, ‘I want you to do an exercise for me — every time somebody says congrats, thanks, awesome year, ask yourself what have I done today to prepare myself for tomorrow or this next season. And what happens is that triggers your brain a lot, because what I’m finding — every time somebody pats me on the back, I go, ‘Hey, what have I done today? I better do something,’ because it’s a trigger. And there’s a whole lot of them pats on the back, and I told ’em, ‘Those things can go from pats to knives if you ain’t careful.'”

The reigning national champion Georgia Bulldogs are currently ranked #3 in the preseason rankings behind the Ohio State Buckeyes and Georgia’s rival Alabama. That alone should provide enough hunger to keep Kirby’s Dawgs hungry as they enter the new season.

Marty & McGee also asked Kirby if it’s different for him this time around and if he can do it again. Kirby Smart said “naw, it’s the same. ‘Can you do it? Can you do it again?’ It doesn’t go away. It’s like the first question after the game, people were like ‘how are we gonna be next year, coach?’ And the 24 hours goes quick.”

Reality vs. The Dream

When asked about how achieving his childhood dream of winning a National Championship for the Georgia Bulldogs compared with the reality of doing so, Kirby Smart had an interesting response:

Marty Smith: “You spent your entire life dreaming of achieving that in some capacity, right? You’re the head coach of your childhood dream. And you brought that (title) back home to this state. How did the reality of that achievement compare to what the dream looked like all those years ago?”

Kirby Smart: “Well, I don’t know that the reality was quite equal to the dream, to be honest with you. It’s like, we talk about ‘excitement versus relief’. There was both. I mean, you want to be honest with your feelings, there was some relief and there was a lot of excitement. The dream for me was never about winning a National Title, the dream was about being as successful as you can be and really impacting young men’s lives.”

I’m calling shenanigans on that. Kirby Smart 100% dreamt about winning a National Championship for the Georgia Bulldogs after their 40-year drought. At some point I’m sure he started thinking about how impactful it would be for the players and their futures but that absolutely wasn’t the lifelong dream. No little kid or teen or young adult is thinking about that. None.