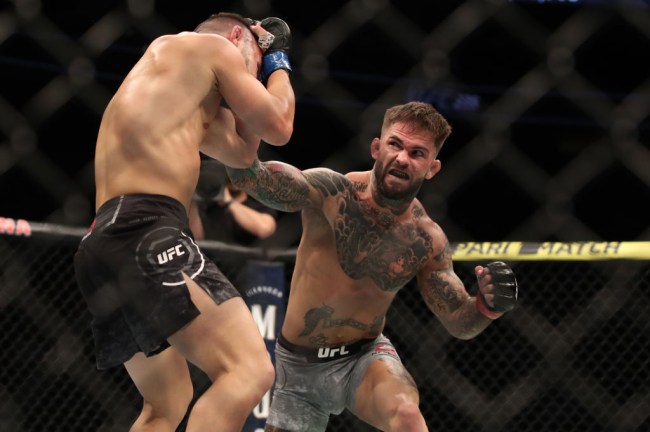 However, if you’re a fight fan and looking to make a little coin betting on UFC 250, we’ve prepared this primer for you.

Now, if you’ve been following our UFC gaming guides for the past few events, you’ll know that our picks are never 100-percent correct (it is called gambling afterall). But, we’ve definitely selected a few winners … and not just favorites on the card. Our track record includes picking a slew of underdogs and parlays because, well, that’s where the real money is.

Looking at the UFC 250 card, there isn’t a ton of straight-up action at the sports book, so it’s important to be creative in your picks. It’s also probably a good idea to hedge a few bets so that you don’t lose your shirt. That wouldn’t be fun. So, be sure to spread your money around a bit to avoid a devastating windfall.

If you read @BroBible, you probably just won some money on #UFC249 …
https://t.co/IniekBpMS7

Examining the fights and the odds, there are a couple big underdogs on the card: main event challenger Felicia Spencer (+450) and PPV main card opener Eddie Wineland (+400). Of the two, Wineland appears to be the better play. However, he’s fighting “Sugar” Sean O’Malley (-450), one of the most highly touted talents to join the UFC in years.

O’Malley, along with featherweight champion Amanda Nunes (-525), who headlines UFC 250, are favorites for a reason, but in the case of “Sugar,” there’s one particular facet that is working against him: the smaller 25-foot cage that is being used by the UFC while they host shows at their APEX venue in Las Vegas. A smaller cage tends to force the action, which favors Wineland, an in-your-face brawler. O’Malley is a range fighter and counter striker who benefits from space, so there is a very real threat here.

In the end; however, picking Wineland or Spencer is really just a method to hedge other bets since the payout is so high.

Sticking with the underdog theme, there are a few other “live dogs” on the UFC 250 card, in particular Anthony Rocco Martin (+110), who faces Neil Magny (-140) on the PPV card. Sure Magny is the far more experienced fighter, especially at welterweight, but Martin has been great since moving up to 170 pounds. And while Magny, who’s great at using his jab to keep opponents away, has a significant reach advantage, Martin is an aggressive fighter who will force the action in the smaller cage.

Here are the post weigh-in win probabilities based on current odds. [updated]

Picking Martin in this bout is a good start, but the payout isn’t that high, which is why I recommend trying to parlay a few fights. So here are two parlays to consider:

Anyone looking at this parlay will instantly look at Caceres and think that he’s a bad play, but I beg to differ.

Fighting against 20-year-old Chase Hooper (-185) on the ESPN preliminary card, Caceres has obvious holes in his game, especially in the grappling and submission defense areas. And, with Hooper being a Brazilian Jiu Jitsu ace, it’s plausible to think that this fight is tailor made for the prospect to beat the veteran; however, that veteran gamesmanship and experience is why I’m picking Caceres, who has shared the Octagon with Yair Rodriguez, Kron Gracie, Urijah Faber, and Wang Guan.

If you can accept Caceres as a calculated risk, why not parlay those winnings on O’Malley, a major favorite, before going back to the underdog play with Martin. Finally, trust Amanda Nunes to bring the parlay home.

Now this is a risky play that features all underdogs.

Starting with Kelleher, who just fought three weeks ago, this is a very big gamble, but the payout is worth the chance to turn $10 into $147.50.

Kelleher presents an interesting play for multiple reasons, starting with his activity during 2020. Recording two Performance of the Night bonuses in two fights, he has both striking and submission skills, and he’s fighting for the second straight time at 145 pounds.

The weight is only part of the story here, but at featherweight, Kelleher looks to have more stamina and power in his punches, which is important because his opponent, Cody Stamann (-260) is a wrestler who will pressure and pressure in the smaller cage, and enter Kelleher’s striking range.

Additionally, Stamann is dealing with the death of his younger brother. It’s not a technical piece of information, but fighting emotionally can be a difficult task.

Playing Kelleher is just the start of this underdog parlay, which concludes with Caceres and Martin, but hey, you need to play to win, and this is a big play for a big win.

Having already explained the importance of hedging your bets with massive underdogs (I’ve put a few dollars on both Spencer and Wineland just in case something crazy happens), it’s also a fair play to pick a few favorites. And, looking at the rest of the card, Cody “No Love” Garbrandt (-150), who fights Raphael Assuncao (+120) in the UFC 250 co-main event, is my first pick.

Sure, “No Love” is coming off a three-fight losing streak, all by knockout, but he’s facing a guy in Assuncao who’s not known for power, brawling, or finishes, which seem to be Garbrandt’s Achilles heel.

Instead, I expect Garbrandt to fight a smart, patient fight and pick apart his opponent for three rounds.

The other play I’m looking at is Cory Sandhagen (-111), who fights Aljamain Sterling (-111) in an even money match. With no clear cut favorite, this is the closest fight on the entire UFC 250 fight card.

Both Sandhagen and Sterling are two of the finest athletes competing at 135 pounds. Both fighters present numerous paths to victory and have complete skill sets; however, of the two, Sandhagen has the more unorthodox approach, which may be a major benefit, as Sterling is known to rely on his wrestling to steal rounds.

Using the complete opposite logic that led me to pick both Martin and Kelleher in other fights, I’m going to say that the smaller cage and Sterling’s pressure will actually benefit Sandhagen in this fight. His length and creative striking approach are perfectly suited to tag Sterling with strikes on takedown attempts. It’s a “pick ‘em” fight for a reason, so you need to trust your gut in times like this.

When it’s all said and done, betting on the fights is a great way to become more invested in MMA and combat sports culture. Just remember, if you bet on sports, many of those athletes are black and African American, so if you’re prepared to profit off these athletes, also be prepared to stand with them because money is fun, but integrity is rich.