How to Bet on UFC 248: Israel Adesanya vs. Yoel Romero 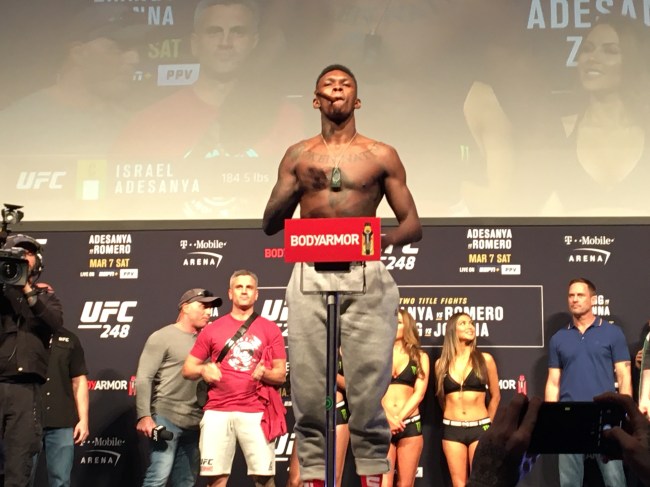 If you want to win big money on UFC 248, be prepared to throw down big money!

While the Pay Per View card is shaping up to be a pretty kick ass event with competitive matchups, champions, emerging rivalries, stars, and feuds, the action is pretty tight at the sports book. Just take a look.

The UFC 248 main event between Israel Adesanya and Yoel Romero may actually be the most intriguing play of all the straight bets on the card, with the latter listed as a +230 underdog at many sportsbooks. Romero at those odds, for 25 minutes, feels like a pretty good pick. However, is anyone really picking against Israel Adesanya right now?

See, told you the action is tight. Tight and tricky.

Perusing the remaining straight bets on UFC 248, there don’t seem to be any other really great live dogs with long odds, which is why it might be good to consider parlaying a bunch of favorites. Consider some combination of Sean O’Malley, Mark O. Madsen, Rodolfo Vieira, and Polyana Viana, although careful on Polyana. There is one school of thought where bettors tend to avoid fights where one fighter has missed weight. It’s some karma, feng shui type shit.

There’s another parlay I’m coining the “Chinese Trio,” and it involves comboing up Li Jingliang, who’s a -180 favorite over Neil Magny, Zhang Weili, who’s a -220 favorite over Joanna Jędrzejczyk in their UFC 248 title fight, and Israel Adesanya, who’s an honorary Chinese after his years as Hei Long and a -280 favorite over Yoel Romero in the UFC 248 main event.

I’m not gonna touch any prop bets right now. I just don’t have the patience for that shit. Instead, I’m considering two other bets, well, maybe three. It just depends which Max Griffin shows up against Alex “Cowboy” Oliveira.

At his best, Griffin has all the tools to body Oliveira for three rounds, using boxing and wrestling to dominate. “Cowboy” is a wild and exciting fighter. He’s delivered some memorable wars in the Octagon, but his style isn’t very risk averse, leading to some inconsistency. It’s a fun fight to kick off the UFC 248 main card on Pay Per View, but perhaps too close to put any real money down.

The other two intriguing picks are Drakkar Klose and Gerald Meerschaert, both of whom are underdogs.

I mentioned Klose, a +155 underdog against Beneil Dariush, in a previous column. They guy is really good. Tons of weapons. Disciplined and effective. On his best day, Klose can bully Dariush for three rounds. Although, Dariush has looked great all fight week, poised and calm in a way that is similar to his run into the lightweight top-10 a few years ago. Picking Klose is not an advisable bet honestly, but I am personally going to play it just to demonstrate that I put my money where my mouth is.

The other, and maybe livest (liveliest), dog is Gerald Meerschaert, a rather unknown UFC middleweight who has gone 5-4 inside the Octagon, listed as a +125 underdog against Deron Winn. Meerschaert is not only durable, but he’s a finisher, recording four submissions and a body kick TKO in the UFC. That type of Brazilian Jiu Jitsu will come in handy against Winn, a wrestler who is 5’6.” By comparison, Meerschaert stands 6’1”. There’s just something intriguing about those two different body types.

So, you see, I wasn’t bullshitting you about the limited action at UFC 248. You need to get creative with your picks because straight bets, unless you’re putting down big dollars on Adesanya or Zhang, there isn’t a ton of low hanging fruit.

Also, try this on for size …

In the last two UFC PPV events, the “prelim headliner” (which is just a fancy term for the final fight before the Pay Per View) has featured rather unexpected results.

Recently there was UFC 247, where veteran James Krause stepped in on 24 hours notice, only to get hosed by the judges in a fight that, for all intents and purposes, he won. And, more relevant to the betting thread, back at UFC 246, a heavily favored prospect, Maycee Barber, lost a high profile fight. The only reason to bring this up is to consider the fate of Jose Quinonez, who’s a +315 underdog against “Sugar” Sean O’Malley.

Honestly, the UFC 248 matchup against Quinonez really is a showcase fight for O’Malley, but having been out of competition for two years, it’s reasonable to question “Sugar.” Personally, I wouldn’t play it, but, some of you are just incorrigible, so have at it what you will.

Happy betting. And, if you win any money on these picks, feel free to tip me a few tokens on my next cam show.