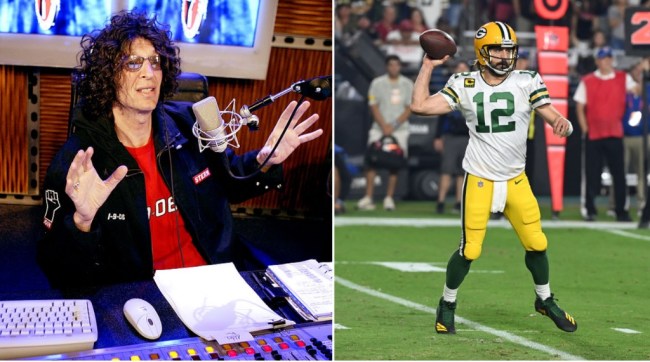 Howard Stern is the latest person to chime in on the Aaron Rodgers’ situation.

Over the weekend, Terry Bradshaw went viral when he straight-up called Rodgers a liar during the FOX pregame show.

Terry Bradshaw rips Aaron Rodgers for being a liar pic.twitter.com/EkEJlSjyXh

On Monday morning, Stern ripped into Rodgers over his appearance on the Pat McAfee show and called on the NFL to throw the Packers QB out of the league for putting his teammates in danger when he lied about being vaccinated.

“If there was decency in this world, I would throw this guy out of the football league so fast, what he did to his fellow teammates and bravo Terry Bradshaw for what you said, and everyone else who has half a brain in the country, but this fucking guy, they should throw him out of the league so fast with the guy who crashed his car at 153 miles per hour”