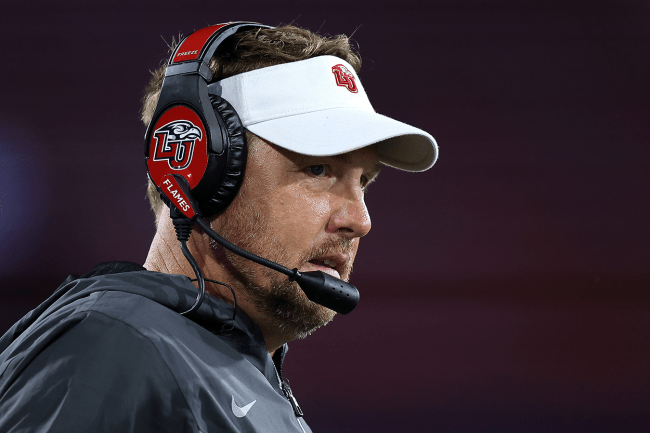 Hugh Freeze was named the head football coach at Liberty University less than two years after he resigned from the same role at Ole Miss. Now, three years after he took over the Flames’ football program, an alleged victim of sexual assault claims that she received bizarre DMs from Freeze on Twitter.

On July 20, 2017, Freeze resigned from his job as the head football coach at the University of Mississippi. His resignation came after chancellor Jeff Vitter and athletic director Ross Bjork conducted an internal investigation. The basis for the investigation was later described as a ‘concerning pattern’ of phone calls to a number associated with a female escort service. The calls dated back to shortly after Freeze arrived in Oxford.

Hugh Freeze was hired as the head football coach at Liberty University on December 7, 2018 by athletic director Ian McCaw.

Prior to taking over at Liberty in November of 2016, McCaw served in the same role at Baylor. After three years in Waco, he resigned his position in May of 2016 in wake of a sexual assault scandal.

Ian McCaw on his resignation + a statement from Baylor's BOR pic.twitter.com/qtZMIYELnB

The scandal was the result of numerous allegations of and convictions for sexual and non-sexual assaults committed by students, many of whom were on the football team. Baylor commissioned the law firm Pepper Hamilton to conduct an independent external investigation regarding the school’s handling of sexual violence.

Pepper Hamilton found that university officials had failed to take action regarding the alleged rape and assaults. It led to the ousting of head football coach Art Briles, the demotion and eventual resignation of Baylor president Ken Starr and the resignation of McCaw.

McCaw hired Freeze to take over his football program two years into his tenure. Over the course of his first three seasons at Liberty, as has been the case since his time at Ole Miss, Freeze often responds, replies, or reaches out to people via direct message on Twitter (myself included), whether he knows them or not.

What appears to be one of his most recent messages is extremely bizarre.

Liberty University was recently involved a significant lawsuit that accused the school of mishandling allegations of sexual assault. Details of the lawsuit can be found here. It claimed that the religious university’s strict policies made sexual assault and rape more likely.

Two of the women involved in the lawsuit were brave enough to speak out in an interview with Inside Edition in November.

Chelsea Andrews was originally known as ‘Jane Doe 7’ in the lawsuit. On late Saturday night, close to midnight, she posted a bizarre message that she received on Twitter. It appears to have come from Hugh Freeze.

In the message, Freeze calls McCaw “the most Jesus like leader…”

Why is the head football coach at Liberty University DMing me during and after my lawsuit with LU?

When I didn’t tag him.

Publicly naming so he can see that I don’t want direct contact w/ him pic.twitter.com/K3icZAuops

Andrews is one of 12 women who filed the initial lawsuit and has received messages from Freeze in the past. Even as the lawsuit was ongoing.