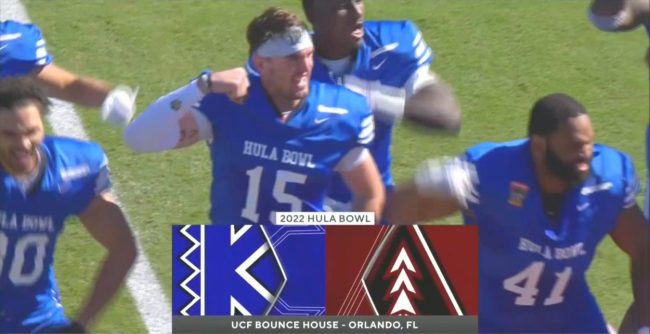 Although the college football regular season, bowl season and playoff has come to an end, that does not mean that the year is done. Over the course of the next few weeks, with the NFL Draft scouting and preparation under way, exhibition games will be played across the country.

The Senior Bowl is the most famous of the various games, but the Hula Bowl has the best tradition.

The Hula Bowl, typically played in Hawai’i, was played in Orlando this year. It features college football players from all over the country, giving them one last chance to show their stuff against live competition.

As part of the experience, the players learn a traditional ceremonial dance that is performed in Mãori culture— the Haka. With vigorous movements and stamping of the feet paired with a rhythmic shouting accompaniment, the players end every practice leading up to the game by learning the choreography.

Players and coaches performing the traditional Hawaiian Haka after practice today for the @Hula_Bowl at #UCF today pic.twitter.com/wzNKwnN2Mk

Both teams participate in the tradition and it’s super awesome. Players from all walks of life, from all of the country learn about another culture and celebrate its traditions together.

ALL UCF STUDENTS AND MILITARY PERSONNEL ARE FREE!

COME WATCH THE TOP PLAYERS FROM AROUND THE WORLD COMPETE BEFORE THEY GET DRAFTED TO THE NFL pic.twitter.com/vZRXPu3gyz

And then, before the game, both teams perform what they learned on the field. It’s the perfect way to set the tone and the Haka is always extremely lit. It goes so hard.

But as you can see, some players understand the choreography better than others. Either way, it’s a fun way for players to bond before playing a game with teammates that they only met a few days prior.