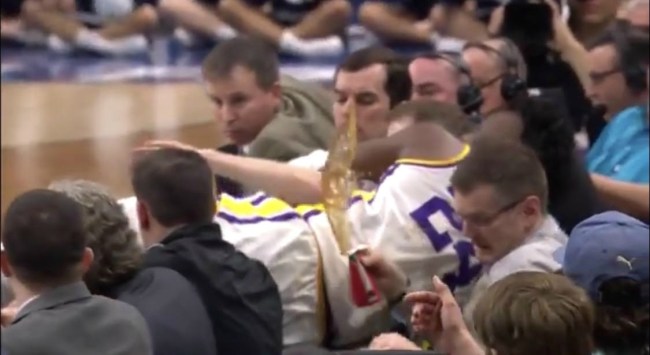 The NCAA Tournament has so many tense moments. There are big leads that get blown. There are last-second prayers that somehow go in. And there are epic drinks that get spilled in the front row because of a player diving into the crowd. It’s that last one that’s getting some Internet attention today.

That’s because, during the call of the LSU Tigers-Yale Bulldogs game today, CBS announcer Ian Eagle gave his narration of a triple spillage that he’s never seen before. Somehow, someway, Eagle — who’s one of sports’ best announcers — makes this thing dramatic. Take a look at it for yourself.

Ian Eagle narrating a spilled drink is the definition of #MarchMadness 🤣 pic.twitter.com/rv1DVgdf1Y

The play happened when LSU’s Emmitt Williams dove into press row, which caused an upheaval of destruction, sending laptops, wires and a media member’s drink flying. And we got to experience the thing as if it were a piece of cinematic art never before seen thanks to Eagle.

Of course, this isn’t the first time that an announcer had some fun with a spilled drink. Just a few weeks ago, we heard another all-time sports broadcaster, Kevin Harlan, give a play-by-play analysis of a spilled beer during a Boston Celtics-Milwaukee Bucks game, so these things are becoming a bit of a trend.

Who ever knew that sitting courtside at a basketball game was so dangerous, right? It’s as if these people were signing up to sit in the splash zone at Sea World, just waiting to get drenched in their beverage of choice. But, hey, if it leads to more calls like Ian Eagle’s today and Harlan’s a little while ago, I’m all for it — because they’re entertaining to see as a fan watching on TV.