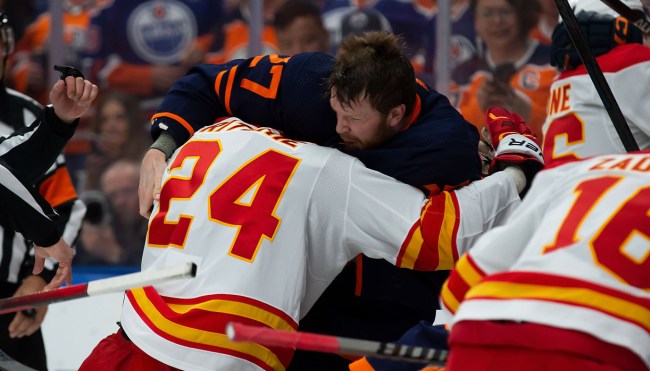 There have been a lot of strange, made-up sports and sports leagues over the years, but this is a new one.

The brainchild of A.J. Galante, best known as the former teenage general manager of the Danbury Trashers of the United Hockey League, Ice Wars International is a organized hockey fighting league.

Ice Wars International events are like the original UFC tournaments with eight combatants duking it out until one man is left standing victorious.

According to the league’s website, Ice Wars International is “comprised of professional and semi professional fighters at the top of their game in top fighting condition.”

Ice Wars is like the original UFC tournaments, only on skates

All fights consist of two one-minute rounds on ice, a KO or TKO ends the fight, and judges score the fight using a points system. There are three weight classes: cruiser, heavy and super heavy.

The fighters begin each match by dropping actual hockey gloves, but underneath each is wearing UFC style padded gloves. The rules consist of no head-butting, kicking, biting, pulling hair, kneeing, tripping, or holding an opponent’s gloves. Helmets and gloves must stay on during the fights.

“The most extreme combat sport ever invented and a fascinating new world where only those rough enough, tough enough, and skilled enough will come out on top,” reads the league’s description on the website.

The winner of the league’s first tournament, which featured a brother vs. brother match where one knocked the other one out, was Daniel “Diamond Hands” Amesbury.

What a weekend… @iceiswar was the most amazing night I have had in a very long time and I can not wait for the next event.

Thank you to everyone involved and everyone who came to the event or tuned in.

ICE WARS is the newest combat sport ready to take the world by storm. pic.twitter.com/pKWgfCFj7c

As an added bonus, Kato Kaelin serves as a producer for the league. (Yes, that Kate Kaelin.) What a world.

The future is now. Hockey fights in a ring. pic.twitter.com/e7UEVMF7fm

Whoever invited this was a mad genius https://t.co/0yNQCueaBA

how do i buy stock in this?

I never knew I needed something so bad