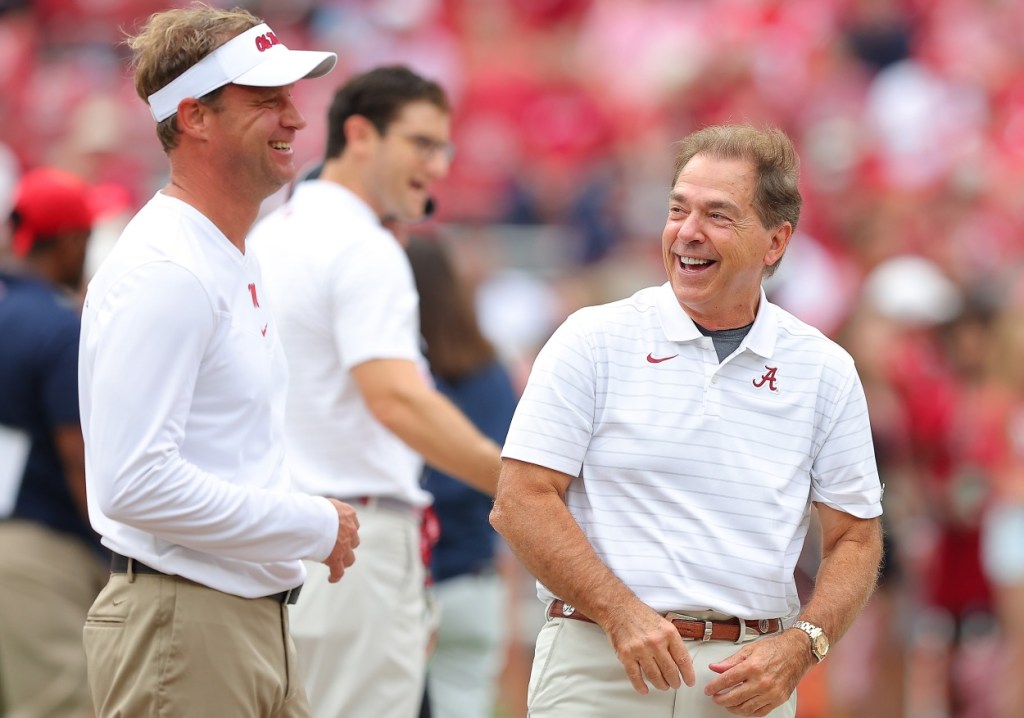 It is pretty impossible to imagine a world where Alabama’s Nick Saban has a beard. He’s as clean-shaven as it gets and puts off the aura of a man who scoffs at beards. Thankfully, we don’t have to try and imagine that world because someone mocked up photos of each of the SEC Football coaches with beards and the results are staggering.

When I think of the ‘College Football offseason’ this is the exact type of content that comes to mind. There’s not much going on. We just moved past the Spring games and SEC Football’s 2022 Media Days aren’t until July 18-21. Recruiting is a slow burn at this time of the year but not much is happening day to day.

If SEC coaches had beards pic.twitter.com/K4t3YOEOe4

I often forget that Jimbo Fisher was born and raised in West Virginia but looking at that photograph the dude looks like he’s missing his raccoon-skin hat and musket rifle.

Lane Kiffin is putting off the aura of a man who just spent 6 days (too many) in Cancun and just found out his flight was delayed by 5 hours and all he wants to do is get home to see his dog. Nick Saban has the vibe of a man who used to sell cars but he made so much money he now owns a chain of car dealerships and rolls into the office every day at 11:37 am after getting in 18 holes each morning.

My only feedback on Kirby Smart is that he looks like the people I knew growing up who were homeschooled and raised in deeply religious households. There’s a seasonal neighborhood of Mennonites near my house where hundreds of families split time between Florida in the Fall/Winter and Pennsylvania in the Spring/Summer and Kirby Smart looks like the guys I see riding three-wheeled bikes to the grocery store.

Now that we’ve digested what it would look like if SEC Football coaches had beards here’s some bonus content.

Some of these are downright hilarious

I won’t critique each of them. These pictures do the speaking for me. But I’ll include a few reactions here from Twitter so you guys can see what others are saying:

Saban with a beard giving off them Zaddy vibes 😂

I’d love to see what Lane Kiffin would look like if he really grew it out and not just a rendering like this:

People are saying Coach Pittman looks like a thick Harrison Ford from The Fugitive https://t.co/PF7CE8VlKp

Anyway, long live the offseason. Without it, we’d never have magnificent content like this where bored people imagine what it would look like if SEC Football coaches had beards.