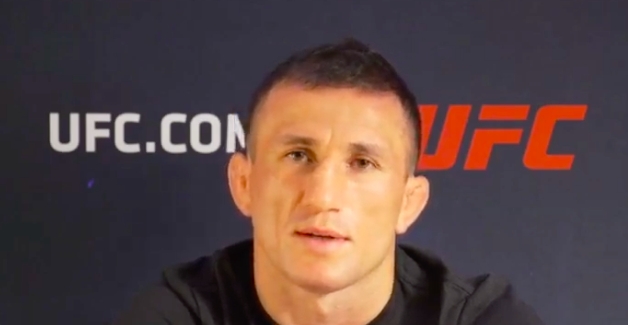 There’s a reason why UFC bantamweight Merab “The Machine” Dvalishvili earned his nickname. The native of the Republic of Georgia has an otherworldly gas tank and cardio. Once he starts, he simply does not stop.

Fighting on his first PPV main card at UFC 252: Miocic vs. Cormier 3, the fifteenth-ranked Dvalishvili is perhaps the most feared and dominant wrestler in the UFC bantamweight division. His transitions from standup to takedowns are seamless, full of unique setups and perfect execution. And once on the ground, it’s straight smashing time, as Dvalishvili employs the tried-and-true ground and pound technique.

First discovered on Dana White Lookin’ For A Fight, Dvalishvili enters UFC 252 on the heels of a pair of record setting performances for takedowns by a bantamweight, recording 12 takedowns against Casey Kenney in February, only to break his own record with 13 takedowns against Gustavo Lopez in June.

Dvalishvili is a different level of wrestler than his bantamweight counterparts. His style is not the boring old lay-and-pray routine. In fact, it’s fan friendly, much in the same way as “UFC Fight Island” breakout star, Khamzat Chimaev.

With Dvalishvili, who has already drawn stylistic comparisons to UFC lightweight champion Khabib Nurmagomedov, the takedown can come at any moment, but you never know exactly when. There’s an edge and anticipation while watching his fights because he has that heavy smashing ability, combined with sheer athleticism and black belt Judo skills. He’s a total animal inside the Octagon, executing with speed, precision, accuracy, and dominance, which is exactly why Merab has landed 8.67 takedowns per fifteen minutes of action, the best mark by any fighter in UFC history.

Now set to take on twelfth-ranked John Dodson on the UFC 252 PPV on ESPN+, Dvalishvili is on the cusp of taking a major step in his UFC career, one that could garner him increased notoriety and raise his profile in the bantamweight division. And as good as Merab has been during his current four fight win streak, Dodson is a savvy and experienced veteran, a two-time title challenger with power in his hands, along with tremendous speed at 135 pounds.

With Dodson playing the perimeter striking game, blitzing into close range and then out, it’s unclear how effective Dvalishvili’s takedown game will be against a more experienced, and quicker fighter. Dodson does have excellent takedown defense, and given his speed, he may have the ability to thwart all of Dvalishvili’s attempts to bring the fight to the ground.

And then what? Will Merab have to strike with Dodson? Good thing he has a sweet right high kick and once even finished a fight via spinning backfist KO.

Considering how dominant his wrestling has been in the UFC, it’s no surprise that Dvalishvili hasn’t had too many opportunities to showcase his striking game, but this may be a fight where he needs to rely on his standup skills a little more in order to wear Dodson down, before bringing the contest to the mat.

A win here is crucial for Dvalishvili, who has been calling out UFC wunderkind “Sugar” Sean O’Malley, who fights an hour after Merab in the UFC 252 co-main event on ESPN+. And while a future matchup with O’Malley is still a longshot for “The Machine,” there’s a lot at stake for Dvalishvili at UFC 252. Should he best Dodson on Saturday night, there are a number of big fights out there for the taking.