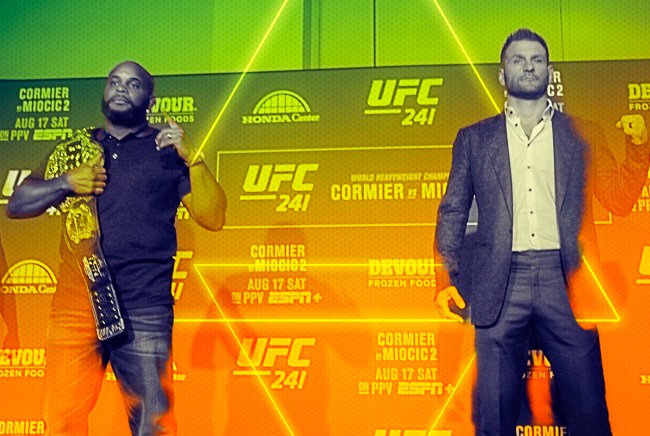 Not sure how this has flown under the radar up until now, but there’s a huge UFC fight this weekend.

While the actual Miocic vs. Cormier trilogy fight goes down at UFC 252 on ESPN+ Pay Per View on Saturday, August 15 (7 p.m. PST . 10 p.m. EST), the matchup is about more than just the fight inside the Octagon. It’s about a compelling backstory and a rivalry that goes back several years, with both Miocic and Cormier winning the title off of each other, as they split the previous two fights.

Miocic vs. Cormier is not only the fight to determine the greatest heavyweight in UFC history, but it also may be the last time we see either fighter compete in the Octagon, so will it be the hard hitting Miocic, a two time UFC champ with heavy hands and tremendous athleticism? Or will it be Cormier, a world class wrestler with a smotheringly dominant and well-rounded style?

Continue below to catch up on all the important storylines and details for UFC 252: Miocic vs. Cormier 3.

Paramount to understanding Saturday’s trilogy fight between Stipe Miocic and Daniel Cormier is the need to understand the previous two fights, along with the ebb and flow of the entire Miocic-Cormier rivalry and arc that has spanned more than two years.

By the time that Miocic and Cormier step into the Octagon at the UFC Apex on Saturday, August 15, the pair of eventual UFC Hall of Famers will have shared some 27:42 worth of cage time.

Cormier and Miocic know each others’ styles and tendencies so well, that guessing how the third fight will play out is still quite unpredictable. Will Cormier try to wrestle like he did in the first two rounds at UFC 241, or will he look to clinch and employ the dirty boxing that worked so well at UFC 226? And for Miocic, will he come into the fight lighter on the scale, hoping to use his speed and boxing, or will he look to throw Cormier a curveball and attempt to bully and overpower the former champ?

Both Cormier and Miocic have felt each others’ power and tasted the sour leather of heavy punch to the face. And whereas Cormier found success using the clinch and close-range strikes to knock Miocic out and win the title two years ago at UFC 226, it was Miocic who reclaimed his championship, busting Cormier up to the body before the eventual TKO win at UFC 241 last August.

Stylistically, there’s really no way the third fight between Miocic and Cormier can be anything less than a minefield of strikes and counters. These two fighters present an amazing clash of techniques, where action is forced, both through clinchwork and chain wrestling, but also through kickboxing and good old fashioned fisticuffs.

Cormier and Miocic are both finishers, so it’s likely one of them will eventually go to sleep in the cage, but an interesting angle to this trilogy is the actual Octagon, which will be five feet smaller in diameter than the previous two fights. The difference in real estate has many speculating how it will affect the fight.

In one school of thought, the smaller cage favors Cormier, who will look for takedowns at all costs. Conversely, Miocic, who famously won the title in 2017 while knocking out a charging Fabricio Werdum, knows how to fight off the back foot, meaning that he can threaten with a step back counter cross at any moment.

On the surface, the cage size appears to be an obscure detail to factor into a world title fight, but then again, Floyd Mayweather always uses a larger boxing ring because it’s advantageous to his style, so we’ll see what role the cage plays on August 15, when Stipe Miocic takes on Daniel Cormier in the UFC 252 PPV main event.

Outside of the UFC 252 main event, the big story on the card is the quick return of “Sugar” Sean O’Malley, who has already recorded a pair of thrilling knockouts in 2020.

Still just 25, the undefeated O’Malley is on the cusp of UFC superstardom and will step into the co-main event slot for the first time in his UFC career, this coming off his first appearance on a PPV main card back at UFC 250.

O’Malley, who’s currently ranked fourteenth in the UFC bantamweight division, is the perfect storm of slick fighting skill and charisma. Entering the UFC back in 2017 on the heels of his Snoop Dogg-narrated knockout on Dana White’s Contender Series, O’Malley has become one of the breakout fighters of 2020, riding his stoner-meets-ninja persona all the way to the bank.

A new breed of self-made UFC fighter, one who utilizes branding, social media, and streaming to monetize his value, and raise his stock and visibility, O’Malley is considered by many to be the most exciting prospect to enter the UFC in years. He has cache and pizzazz, with plenty of skill to back it up, not to mention a head full of rainbowed cornrows. And, after a pair of Performance of the Night bonuses at UFC 248 and UFC 250, O’Malley will step up to face his toughest test to date in Marlon “Chito” Vera.

Vera is a much more accomplished grappler than any of O’Malley’s previous foes, so there is always a threat. However, O’Malley, who is still quite proficient on the ground, is lethal on the feet, delivering a wide array of strikes, skills, and techniques with devastating speed. The question is, can he be dominant against a fighter of Vera’s caliber?

At this point, it’s clear that the UFC is building a legitimate contender in “Sugar,” but with the bantamweight division full of talent, it will be important to watch every step of O’Malley’s development and witness his progression.

Against Vera, O’Malley will face a different set of challenges than ever before, so how does this rising star respond to different skill sets and styles? And, can he find a way to deliver another highlight reel knockout?