UFC 252 Preview: Where Does the Miocic vs. Cormier Trilogy Rank in UFC History? 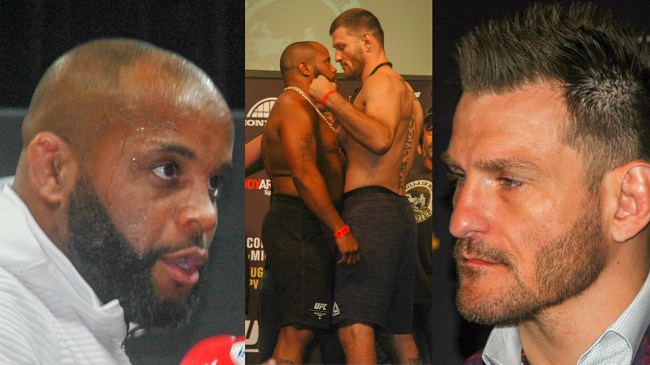 It’s been a while since we’ve had a big-time trilogy fight in combat sports, but that all changes on Saturday night, when heavyweight champion Stipe Miocic faces challenger Daniel Cormier in the UFC 252 Pay Per View main event.

Combat sports and trilogy fights just kind of go together. These third and final chapters have produced some of the greatest moments and rivalries in MMA and boxing, delivering historic outcomes and news-grabbing headlines.

Most famously, Muhammad Ali faced Joe Frazier in 1975’s Thrilla in Manila, the third affair in their four-year rivalry. And while the boxing ring has played host to other great trilogies like Evander Holyfield’s trio of fights with Riddick Bowe and Micky Ward’s rivalry with Arturo Gatti, mixed martial arts and the UFC have also seen more than a handful of great trilogies inside the Octagon.

Legendary fighters like Georges St-Pierre, Chuck Liddell, and Cain Velasquez all cemented their places in UFC history with classic trilogies against opponents like Matt Hughes, Randy Couture, and Junior dos Santos; however, of all the trilogy fights to ever take place inside the Octagon, none is bigger than this Saturday’s PPV main event between heavyweight champion Stipe Miocic and former title holder Daniel Cormier. The winner of their fight on August 15 on ESPN+ will undoubtedly earn the distinction of baddest man on the planet, while being crowned the greatest heavyweight in UFC history.

Understanding how recency can bias opinion, it’s important to stress that this is no hyperbole. Miocic vs. Cormier 3 is an enormous fight between two of the best fighters to ever step foot inside the Octagon. Miocic, a two-time champ who owns the UFC heavyweight title defense record, has the credentials of a surefire Hall of Famer. Cormier’s resume is equally impressive, if not more, having previously held both the light heavyweight and heavyweight titles simultaneously, becoming the first fighter in UFC history to defend both belts.

Sure, there have been other impressive trilogies in UFC heavyweight history. Cain Velasquez’s series against Junior dos Santos between 2011-2013 comes to mind, as does Tim Sylvia’s trilogy against Andrei Arlovski from 2005-2006. Like the Miocic-Cormier trilogy, these other rivalries were also heavyweight title fights, with competitors splitting the first two affairs before the final rubber match. But Miocic vs. Cormier has an added level of intrigue because both fighters have been fully realized versions of themselves throughout the entire rivalry.

Away from the heavyweight division, the UFC has produced some other great trilogies. In particular, a light heavyweight rivalry between Chuck Liddell and Randy Couture previously set the gold standard for trilogies in the Octagon, but it’s important to make the distinction that when Chuck and Randy fought for the first time, it was for the interim title. It’s a small detail, but one that brings it a notch below Miocic vs. Cormier.

UFC Hall of Famer, and Greatest of All Time, Georges St-Pierre also participated in one of the greatest trilogies in UFC history, facing former welterweight champion Matt Hughes three times between 2004-2007. Like the Liddell-Couture rivalry, all three St-Pierre vs. Hughes fights ended via stoppage. St-Pierre and Hughes also competed for an interim title on one occasion, and while this trilogy is the greatest in UFC welterweight history, it falls short of Miocic vs. Cormier because St-Pierre wasn’t quite fully realized when he fought Hughes the first time. He was an emerging star who dethroned the champion, whereas Miocic and Cormier were both champions by the time they first met in 2018. They were both at the top of their games when the rivalry began.

Cormier’s teammate and training partner, Cain Velasquez, was also part of one of the greatest rivalries in UFC history. His trilogy against Junior dos Santos caught major buzz when the two faced off in the very first UFC on FOX event, which was seen by millions.

In their first affair, dos Santos starched Velasquez in a little over a minute. But it was later revealed that Cain was suffering from a major injury at the time, putting some question marks around the result.

The two would go on to fight two more times, at UFC 155 and UFC 166, with Velasquez absolutely dominating the second and third installments. And while Velasquez and dos Santos were both great champions, neither ever achieved next-level success and neither ever headlined a major selling PPV card that neared the million-unit mark.

Cormier, on the other hand has.

In addition to participating on the million-selling UFC 200, Cormier also headlined a pair of big time Pay Per View fight cards when he fought Jon Jones at UFC 182 and UFC 214. While the UFC never reports its PPV sales figures, it’s estimated that both Cormier vs. Jones fights generated more than 800,000 buys, not to mention the UFC 241: Cormier-Miocic II card, which was propelled to major market status, in part due to the participation of Nate Diaz in the co-main event.

All your questions will be answered on Thursday. #UFC252 pic.twitter.com/Yjx6yqNMzx

These are not the only trilogies in UFC history. Former lightweight champ Frankie Edgar faced Gray Maynard on three occasions, one of which ended in a draw. Edgar also went 3-0 against UFC Hall of Famer B.J. Penn, winning a pair of title fights, along with a third affair. Penn himself also fought Matt Hughes in a major trilogy that determined the welterweight title picture for years, so there’s always been a place for big-time trilogies inside the Octagon, but none quite stacks up to what we’re about to witness on Saturday, August 15 on ESPN+ PPV.

Miocic vs. Cormier 3 is essentially the perfect storm: two massive legends squaring off in a rubber match for the heavyweight title. Additionally, it’s also a retirement fight for Cormier, who is coming back for one last bout before he walks away into the sunset, and likely the broadcast booth. Miocic himself has even hinted at retirement on occasion, so it’s also quite possible that UFC 252: Miocic vs. Cormier 3 may, in fact, be the last time we see either fighter inside the Octagon. Go figure.

So, no matter how you slice it, the Miocic vs. Cormier trilogy is as big as it gets in terms of real, true mixed martial arts competition. It’s a pair of legends, going at it one last time, for all the marbles, all the belts, and all the glory.