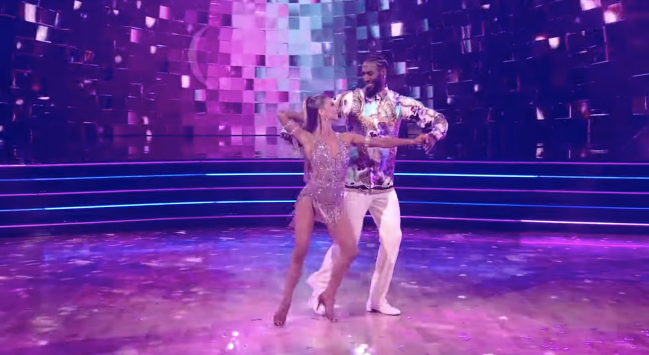 Iman Shumpert is officially a two-time champion. The 31-year-old former shooting guard not only has an NBA title to his name, but he added to his trophy case on Monday night by winning Dancing With The Stars.

Shumpert, who stands 6-foot-5, 212 pounds, can really get down. He beat out the heavy favorites JoJo Siwa and her partner Jenna Johnson to earn the crown.

To win the finale and take the title, Shumpert performed two dances. Both of them earned perfect scores.

He and his partner Daniella Karagach begin the night with a Cha Cha / Foxtrot fusion.

The kicker, however, was his second performance of the night and final of the season. He and Karagach performed a Freestyle routine to Missy Elliot, Ciara and Fat Man Scoop.

It was what guest judge Julianna Hough called her favorite freestyle dance in 30 seasons of the show. He popped off.

Shumpert, who played 10 years with five different NBA franchises, had no professional dance experience. Siwa, on the other hand, had a fairly extensive background in dance.

Shumpert’s win was historic. He became the first NBA star to win the Mirror Ball trophy. Even fans of Siwa agreed that the former first round pick deserved the win.

Here is what some had to say:

Even tho I wanted JoJo to win, I am happy that Iman won. He has no experience as a dancer and fought his way to the top; getting better each week. That's what #DWTS was always about.

#DWTS Iman and JoJo absolutely both deserved their top two positions. Iman has improved so much since the start and is always so energetic. JoJo has constantly pushed the limit and has always made risks. Overall Iman is such a deserving winner.

Iman is the deserving winner of #DWTS in my opinion. He never had any dance experience and has turned into a star. Jojo and Amanda both had some dance experience before and it is pretty obvious too. Iman went from one of the worst to one of the best. That’s the point of the show

Monday night was not the first time that Shumpert received a perfect score. He and Karagach also scored perfection with a Halloween-inspired contemporary dance.

His athleticism was a big factor in Shumpert’s win. He has performed some incredibly difficult routines over the course of the season and his semifinal performance required an impressive amount of strength.