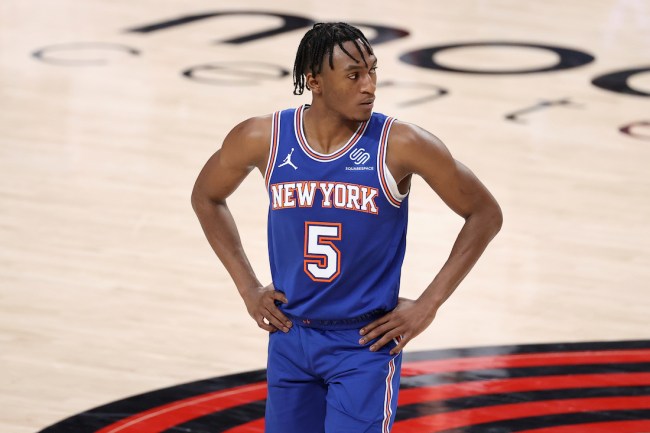 As a proud Kentucky alum, you know I’ve got to keep tabs on guys like Immanuel Quickley, who played for BBN the last couple of seasons. Now a rookie with the New York Knicks, the guard has impressed in his first NBA season, averaging a healthy 11.8 points, 2.5 assists and 2.3 rebounds per game. While those aren’t Rookie of the Year type of numbers, for being the 25th overall pick in the 2020 NBA Draft, that’s some solid production.

A former five-star prospect just a few years ago, Quickley has always had talent. But because he didn’t immediately standout like other UK players who often go one-and-done, there were plenty of pundits who were quick to criticize him leading up to last year’s draft. Instead of having the comments impact him negatively, Immanuel made sure he kept receipts by taking screenshots of all the doubters.

In a recent appearance on the New York Post‘s Big Apple Buckets podcast, Immanuel Quickley described his reasoning, while talking about how he finds motivation from all of it.

“Man, I got that screen-shotted. I have that screen-shotted,” Quickley said during an appearance this week on The Post’s podcast Big Apple Buckets with hosts Sal Licata and Jake Brown. “I have a camera roll album of all the stuff that motivates me, and that’s one of them. Definitely screen-shotted and saved in my phone.

“I will say it’s not all negative stuff. It’s positive stuff that was said, too, and affirmations, but some of the stuff that’s in there are definitely things where people said I couldn’t do this or couldn’t do that. I just try to use that to prove the haters wrong and try to prove myself right.”

This is some amazing stuff from Immanuel Quickley, guys, as he refuses to let outsiders try to tear him down. So mad props to the 21-year-old for finding a way to turn the negative into a positive, and fuel himself to continue to get better. As somebody who has a crater-sized chip on his own shoulder, stuff like this is completely relatable.

While the point guard’s proving his worth in the league at the moment, he was quick to admit that it took some convincing for teams like the New York Knicks to believe he could be a solid NBA player. Based off of his stint at UK, Quickley knew he needed to improve different parts of his game to get regular run.

“I don’t know if they believed me, based on what they’d seen in college,” Quickley said. “But I told teams that I was somebody who can play on or off the ball. That was one of the things that I told every NBA team.

“I think the Knicks really knew who I was with all the connections that were with Kentucky and things like that. But to answer that question I really feel like I’m comfortable either/or, and I try to work out in a way that I can be versatile whether on or off the ball, guarding on or off the ball. I just try to be as versatile as I can so I can play with basically anybody.”

Immanuel Quickley may have been overlooked and/or doubted prior to the 2020 NBA Draft, but he’s been a nice addition for a Knicks team that’s actually in the playoff mix at the moment. And if he ever needs a little extra motivation to keep working to get better, all he’s got to do is grab his phone.