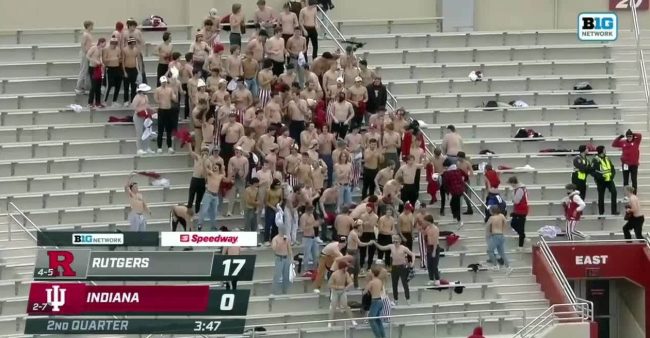 Guys are always going to be dudes, even if that doesn’t always make any sense. Take Indiana’s game against Rutgers, for example.

The Hoosiers, who are four wins away from bowl eligibility and have sunk out of national relevance after a record year in 2021, hosted the Scarlet Knights on Saturday. When the game kicked off at noon eastern time, it was a brisk 36 degrees outside and overcast.

Despite the home field advantage, Indiana struggled to get anything going and quickly fell behind 17-3 in the first half. With a losing result being almost inevitable, and little hope from the home fans, students started to make their own fun.

For whatever reason, a group of fellas ran to the corner of the upper deck and took of their shirts.

And then the crowd of likely liquor-blanketed shirtless dudes continued to grow.

By the time that the game went to halftime, the shirtless soirée had grown to at least 200. They were going bonkers for seemingly no reason.

Bros will be bros 😂 pic.twitter.com/0wszCqh7j5

While there is no telling why this group of students — all male — decided to go tarps off in the freezing cold, but perhaps it was in protest of the terrible on-field result. Here is the full backstory:

Alright so that 10 minutes of madness in Section 19?

Well I found the guys who started it all. And I sat with the freezing cold dudes as they started a viral flash mob.

Here’s how it started and here’s their story, for @IndyStarSports, #iufb: https://t.co/v6fgfXfZh0

Regardless of reason, of which there is probably none, this is the epitome of guys being dudes.