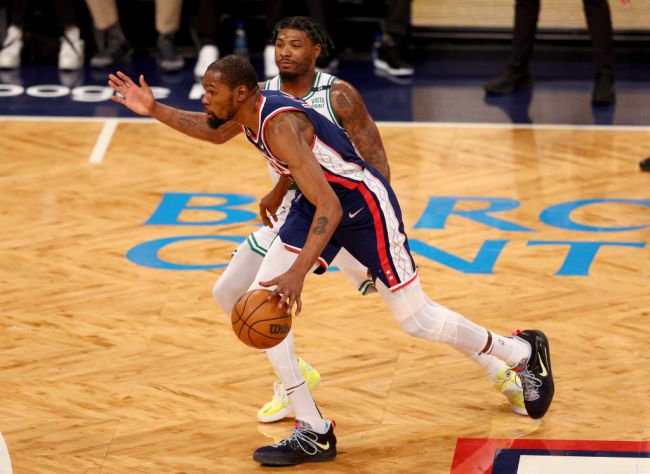 The Brooklyn Nets are in a tough spot right now. They aren’t sold on the idea of committing to Kyrie Irving long-term, but letting him leave in free agency this offseason could be a disaster for them.

If the Nets and Irving can’t come to an agreement, it is expected that Kevin Durant would be the next one to leave the team. However, according to NBA insider Adrian Wojnarowski, there is a way the Nets can keep Durant. They just need to prove to him that they can still build a championship roster around him.

"I'm told that Kevin Durant has not told the Nets that if Kyrie Irving leaves, that means he's going to ask for a trade"

“I have been told in the last few days that scenario is exactly how Kevin Durant was looking at this. If Kyrie left, well, the Nets would have to show them they can reshape this roster and come back with a championship roster.

“I think that’s an evolving thought process with Kevin Durant. The Nets knew when they entered these conversations with Kyrie Irving about his future, there was great risk about what it meant for Kevin Durant moving forward if they weren’t prepared to a long-term max deal with Kyrie Irving.

“There’s going to have to be some dialogue here to see if there’s a way they can move forward. I think this is a very perilous time for the future of this Nets’ organization and this great experiment with Kyrie Irving and Kevin Durant coming together to try to win a championship in Brooklyn. It’s not going great.”

While this does leave the possibility that KD wouldn’t request a trade if Kyrie leaves, it will be a tall task for the Nets. The Nets traded away many of their appealing assets in the James Harden deal and were only able to receiver 1 first rounder when they traded him away.

The Nets don’t have a clue what they’re going to get out of Ben Simmons, so he isn’t exactly a strong selling point for KD. There are also just aren’t many stars actually available right now. The Blazers appear to be trying to win again, so Damian Lillard is unlikely to be an option.

The Jazz are reportedly trying to trade Rudy Gobert, but he’s probably not a player who would convince KD to stay. Maybe the Nets could work out a 3-way sign-and-trade for Bradley Beal, but that depends on what he decides for his future and the team getting Kyrie being interested in it.

Even if there is hope that the Nets won’t lose KD this offseason, they certainly have their work cut out for them.