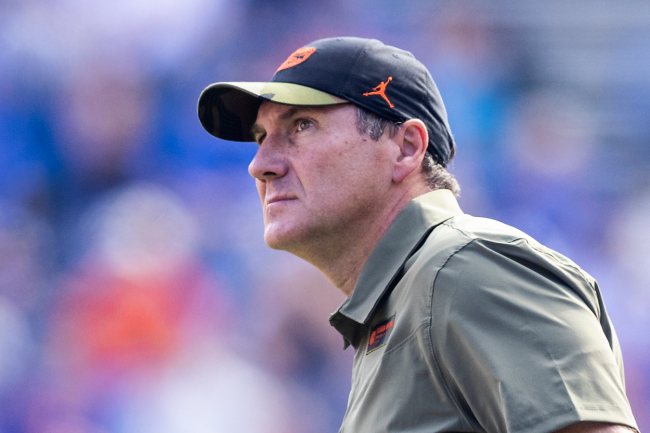 Dan Mullen is officially OUT as the head coach of Florida football. The 49-year-old was fired on Sunday morning.

Florida’s decision to let go of their four-year head coach came after an embarrassing overtime loss to Missouri. Perhaps the icing on the cake, however, was getting trolled by Tigers head coach Eli Drinkwitz after the game. You simply can’t recover from getting burned by the nerdiest coach in the SEC.

I have long been quick to criticize Mullen. He is undeniably a good coach in the right fit, but I have been acutely familiar with Mullen since his days at Mississippi State and I knew that he would never work long term at Florida.

I called Mullen a farcical showman last fall and Gators fans were QUICK to jump down my throat. I even doubled down in October after Mullen gave the corniest “look at me” press conference following the loss to Kentucky. Even then, despite the writing on the wall, Florida fans defended him in my DMs.

Credit to Florida fans for their sightless, ignorant loyalty, I guess?

Anyway, look where we are now.

Mullen is gone and the Gator faithful is predominantly thrilled. Funny how that works.

So, here’s the thing. By firing Mullen without cause, he will get paid out $12 million not to coach in Gainesville.

Regardless of his employment status and upcoming paychecks, Mullen is still as soft as ever. A new report from Florida AP reporter Mark Long says that he was offered the opportunity to stay on for Florida’s final game.

The Gators will not be bowl eligible this season but have one final game against the Seminoles. Mullen, who has consistently made everything about him throughout his entire career, decided to pass on the opportunity to give Florida State one final kick in the ribs on the way out.

Sure, he has no reason to stick around and there isn’t much to gain from coaching. Sure, he is getting paid either way.

But Mullen has made the world revolve around him for the last 12 years, and now he’s choosing to shy away from one last chance in the spotlight.

Wouldn’t a prideful man want to leave a place that meant so much to him (so he says) on a high note with a win over his in-state rival? Wouldn’t he want the chance to thank fans for the time he spent there? Would he not want to be with his players through the end, especially the seniors?