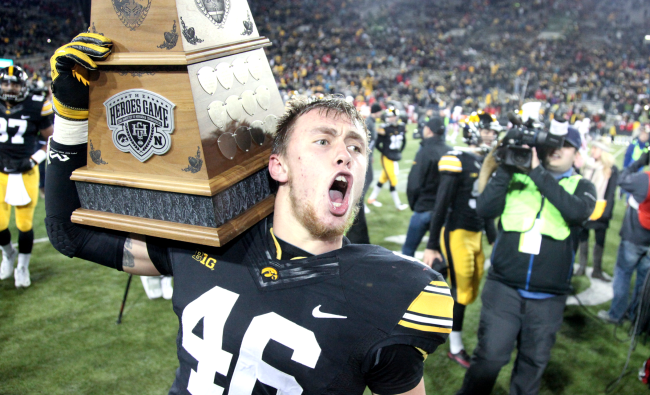 San Francisco 49ers tight end George Kittle spent four years at the University of Iowa before being drafted by in the fifth round with the 146th overall pick in the 2017 NFL Draft.

During those four years (2013 through 2016), Kittle and the Hawkeyes played the University of Nebraska Cornhuskers four times for the Heroes Trophy in their annual rival game.

Three times in that rivalry game, Kittle’s Hawkeyes came out on top, only losing in overtime to Nebraska in 2014 37 to 34.

Since that close defeat, the Iowa Hawkeyes have gone on to win their matchup against the Huskers six straight times by a combined score of 208 to 116.

So it was rather interesting that the University of Nebraska Twitter account chose to use a photo of a Cornhusker defender attempting to tackle a Hawkeyes player in a little Shark Week themed photo this week.

Nothing to see here, just a friendly ‘interaction’ ☠️#thegoodlife pic.twitter.com/Ez49iK8E04

The University of Iowa football Twitter account was quick to respond, telling Nebraska, “Interesting photo choice because it’s been 2,425 days since your last good ‘interaction’ with us.”

Interesting photo choice because it’s been 2,425 days since your last good ‘interaction’ with us. https://t.co/NN9rz12d7X pic.twitter.com/UmHm7jx6ob

However, former University of Iowa star George Kittle took things a step further when he dropped a serious burn on Nebraska football for their weak tweet attempt at trolling the Hawkeyes. He even tagged former Nebraska star and current NFL linebacker Will Compton in his response.

Posting a missed tackle from a game you’ve lost 6 years in a row. I would love more “interactions” with you guys! @_willcompton you must be so proud 😂🤣😂

Iowa has also won 7 of the last 8 games between the two teams – a fact that Compton is obviously very aware of based on his reaction to Kittle’s tweet.

Y’all are the ones that keep posting about iowa.. seems like hawks have free real estate throughout the entire program 😬😅

Some Husker fans, however, were willing to take their lumps.

Good grief. Iowa has won the last six in a row. We should shut up until we win at least one in a row. Not that "1-6" would suddenly become a worthy chant.

Oh… and that tackle image that the Nebraska Twitter account featured in their tweet? Yeah, Kittle was right, and apparently has one hell of a memory.

Also would love to point out this is a missed tackle, this just makes this tweet even worse lmao pic.twitter.com/dwRogoFi6Y

In Nebraska’s defense (sort of), they do hold a overall 29-19-3 record in the rivalry game which dates all the way back to 1891. They just haven’t fared very well lately… at anything.

From earlier: #Nebraska's first decade in the Big Ten has featured plenty of coach/AD changes, several schematic and recruiting approaches, only one division title and a lot of losing since 2016. What's gone wrong + how can Big Red get things on track? https://t.co/VAV0M9EVIh