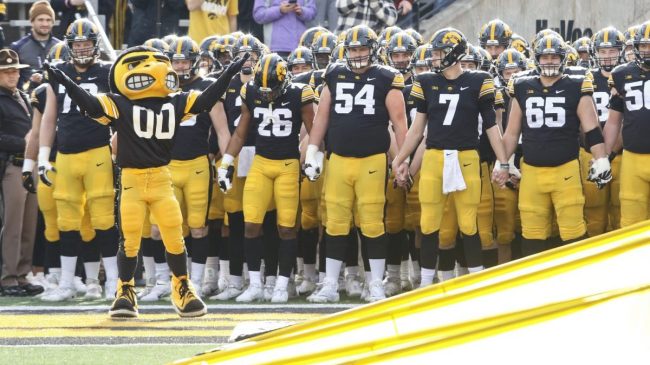 The start to the 2022 college football season isn’t going as planned for the Iowa Hawkeyes. After an up and down 2021 season that saw Iowa reach the No. 2 ranking in the AP Poll, expectations are high in Iowa City entering the new year.

The Hawkeyes begin the season with what many expected to be an easy victory against FCS opponent South Dakota State. Thus far, it’s been anything but that.

To say Iowa’s offense sputtered in the first half of their game against the Jackrabbits would be kind. The Hawkeyes produced just four first downs and and 56 total yards. The lack of the production sent them into the break tied at just 3-3 with their FCS foe.

Fans couldn’t believe what they had just seen.

Perhaps the worst moment of the half came early in the first quarter. The Hawkeyes’ defense pinned the SDSU offense deep in its own territory and forced a punt. Punter Hunter Dustman then shanked his kick, sending it just 17 yards and setting Iowa up in prime field position at the Jackrabbits’ 27-yard-line.

The shank set Iowa up in perfect position for the first points of the game. Instead, the offense sputtered. Leshon Williams began the drive with a 2-yard run. Quarterback Spencer Petras then hit Sam LaPorta for a 3-yard pass, before throwing incomplete on third down.

Everyone around the Iowa program knew about their offensive deficiency. The Hawkeyes averaged just 23.4 points per game in 2021. That ranked just 94th out of 130 FBS program.

Instead, the long-time Iowa coach just shuffled the deck chairs. That resulted in his son, Brian, receiving an expanded role on the team’s coaching staff.

Early returns on the decision don’t appear to be great.