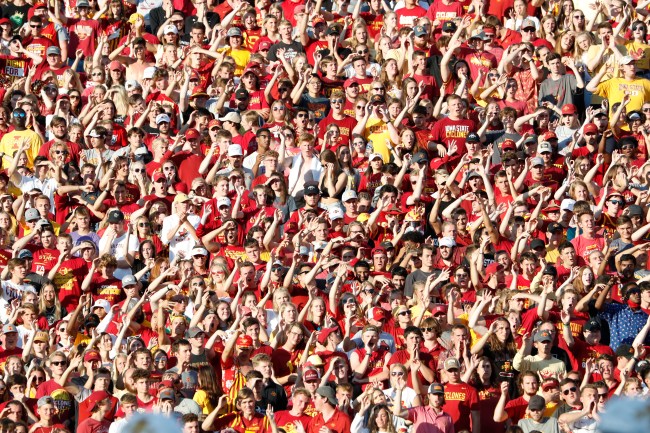 Although Thanksgiving food comes with a lot of debate, the best part of the meal might actually be the next day. Iowa State football, while not by choice, is leaning into that notion for Friday’s game against TCU.

After a long night of gorging on turkey, ham, mac and cheese, green beans, stuffing, mashed potatoes, cranberry sauce, sweet potatoes and pie, the day after Thanksgiving allows you to do it all over again. However, if you are smart, before eating a second Thanksgiving dinner on Friday night, you’re eating it in sandwich form for lunch.

Cyclones fans, as well-educated individuals, will surely take advantage of a new stadium policy to do just that.

Because of a staffing shortage for Friday’s game, Iowa State is unable to provide full concession services. As a result, fans will be allowed to bring their own snacks into the game.

“The long Thanksgiving weekend has made it difficult for our concessions partner to find individuals and service groups to fully staff our game-day concessions operation, so we will allow fans to bring their own food into the game on Friday,” said ISU Director of Athletics Jamie Pollard. “While we will have limited concession offerings available for purchase, not all of our stands throughout the stadium will be open, and we believe that allowing fans the ability to bring food items into the stadium will take the pressure off those concession stands that we are able to staff.”

It couldn’t come at a better time.

The food that fans are bringing into the stadium must adhere to the university’s clear bag policy, which will require plenty of sandwich bags. Additionally, fans may also bring their own water bottle, up to 20 ounces, into the stadium.

Even though it technically has to be unopened or empty, it is hard to imagine that security will be particularly strict in terms of checking. So, if Cyclones fans are smart about it, they should pack up their finest leftovers, throw some of grandma’s leftover vodka in a water bottle, seal it all up tight, and have a Friday.

The game kicks off at 3:30pm CT and will determine whether TCU is bowl eligible or not.