Despite Winning Its Season Opener, One College Football Team Lost All Of Its AP Top 25 Votes 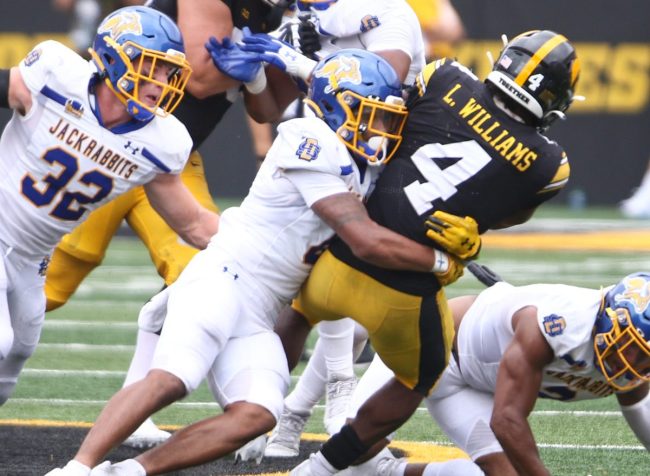 The Iowa Hawkeyes didn’t have the season opener that many envisioned. The program entered the year sitting just outside the Top 25 rankings, posting 163 votes in the preseason poll.

That was good enough to land a 28th-place rating in the AP Poll, and with a win over South Dakota State in Week 1, they’d have a chance to crack the Week 2 rankings.

Iowa picked up the win, but it took a massive tumble with the voters.

The Hawkeyes put on one of the most uninspiring shows in Saturday’s slate of college football action. They set records for all the wrong reasons, becoming the first team to ever win a game while scoring seven points but not having a touchdown.

Iowa beat the Jackrabbits, 7-3, notching a field goal and a pair of safeties.

The media was not kind following the win, and it appears that it’s carried over to college football voters.

When the latest AP Top 25 Poll was released, the Iowa Hawkeyes were nowhere to be found. All 163 votes from the previous week had disappeared. That puts the program outside the top 43 teams in the country who received at least one vote in the rankings.

You can’t necessarily blame voters. After all, the Hawkeyes finished with less than 170 total yards of offense against an FCS opponent. They averaged just 2.7 yards per play and were held out of the endzone.

Still, I can’t remember a team falling so hard after a Week 1 victory.

It will take a much better effort this weekend with Iowa taking on in-state rival Iowa State in the battle for the Cy-Hawk Trophy. A win might get some of those votes back.