Is Whittaker vs. Cannonier a True Title Eliminator? A Look at the UFC 254 Co-Main Event 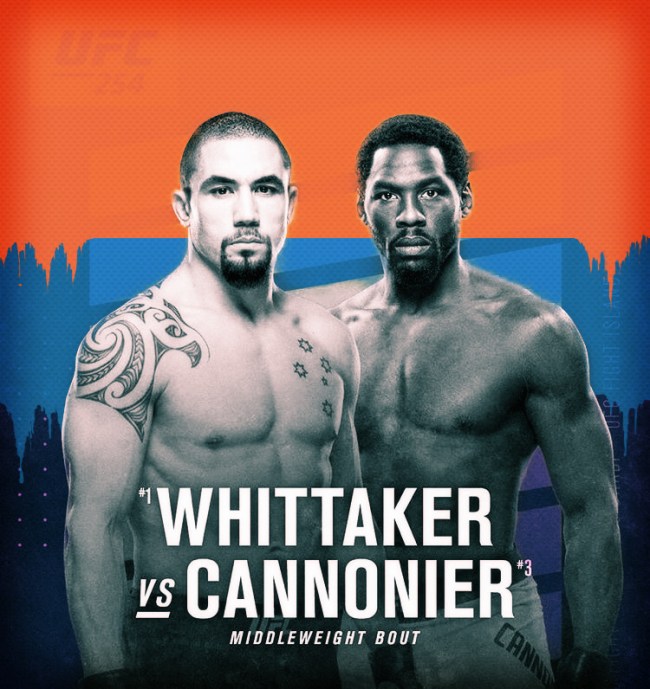 Longtime UFC fans remember the good old days, when legit title eliminators were declared as such beforehand, giving these fights an extra sense of anticipation. Who will earn the next title shot? There was only one way to find out.

The UFC has long since shied away from this practice, rarely making official title eliminator fights, so when one comes along, it’s definitely sort of a big deal.

That will be the case this Saturday, October 24 (11 a.m. PST / 2 p.m. EST), when former middleweight champion Robert Whittaker faces Jared Cannonier in the UFC 254 co-main event. The winner here will earn a shot at current champion Israel “Stylebender” Adesanya.

Currently ranked first and second in the 185-pound division, Whittaker and Cannonier represent the best of what the middleweight division has to offer up to Adesanya, and at UFC 254 both fighters will throw heavy leather in an attempt to secure the next title shot. They’ll need to deliver big to guarantee the next crack at the champ.

Years ago, before the UFC roster expanded to over 500 athletes, when the promotion was still building divisions, there often were only two choices for the next title contender. To satisfy the need to build up a viable and marketable contender, the UFC would position these title eliminator fights on highly visible fight cards, much like they’re doing with Whittaker vs. Cannonier, who fight just before Khabib Nurmagomedov and Justin Gaethje at UFC 254.

In the years that have passed however, the promotion has been more reluctant to book title eliminators, often because there are a number of viable contenders, and popularity occasionally has some influence over merit.

Just last week, featherweights Brian Ortega and “The Korean Zombie” squared off in a title eliminator to face current 145-pound champ Alexander Volkanovski, but as recently as UFC 250, top bantamweight contender Aljamain Sterling got lost in the shuffle due to the lack of a definitive title eliminator fight.

Matchup up against Cory Sandhagen in what looked very clearly to be a title eliminator, Sterling won the fight by first round submission; however, because the bout was never declared as an eliminator, it ended up taking close to four months for the UFC to name Sterling as the next challenger to Petr Yan’s title. The two will finally battle for the belt at UC 256 in December, but imagine if the Sterling vs. Sandhagen fight was promoted as a title eliminator? It could have felt that much more important.

Fortunately, the UFC is handling the Whittaker vs. Cannonier fight much differently.

See, title eliminators give hardcore fans, and new fans alike, the chance to become invested in the progression of and career arcs of the fighters they’re watching. It creates continuity and carry over from event to event, and if Whittaker or Cannonier can seal the deal with a dominant performance, it’s very likely that viewers will tune in for their shot at the belt. The way these guys hit, that’s likely to be the case.

A former champ who put together one of the most impressive runs in middleweight history, Robert Whittaker — his official nickname is “The Reaper,” but fans have given him the moniker “Bobby Knuckles” — is one of the most well rounded and smooth MMA fighters on the UFC roster.

With tremendous power in his fists and a bevy of different kicking attacks, Whittaker’s standup is only matched by his ground game, which includes excellent defensive wrestling and an underrated Brazilian Jiu Jitsu game. Oh, and he’s super fast and quick for the division, almost sneaky fast and quick, which is a great complement to his tremendous fight IQ.

Conversely, Cannonier, a former heavyweight who dropped down to light heavyweight before making the eventual move to 185 pounds, is a different kind of beast. Packing immense power in his hands, Cannonier once kicked out Anderson Silva’s knee so badly that it ended the fight. That’s some straight savagery.

Cannonier may not be the most well-known fighter, but with a perfect 3-0 record in the middleweight division, he’s quickly moved up the ranks on account of his memorable knockouts. And, in the case with his fight versus Whittaker, Cannonier has already been targeted by Adesanya as his next challenger, should he walk away with a big finish at UFC 254.

See, while UFC president Dana White has called this fight a title eliminator, he’s been very slick to leave the door open to a potential change, for a few reasons. First of all, Whittaker has already faced Adesanya, losing to “Stylebender” at the UFC’s most widely attended event, UFC 243, which took place at Etihad Stadium in Australia.

Off to the beach 🏝

Somewhat hesitant to book a rematch — this actually seems like a no-brainer, but for whatever reason, the UFC is non-committal on Adesanya vs. Whittaker 2 — White has been vocal about Cannonier’s chances of fighting for the middleweight title next if he can earn a stoppage over Whittaker. The caveat about needing a finish leaves an opening in case the UFC decides to go in a different direction. And, that direction very well could be a super fight between Adesanya and longtime light heavyweight champion Jon “Bones” Jones, who has been going back and forth with “Stylebender” on social media, trading barbs and insults.

The Jones vs. Adesanya fight is, understandably, a very lucrative one, but with “Bones” relinquishing his title in August, declaring his move up to heavyweight, it’s more important to keep some order in the middleweight division and book the winner of Whittaker vs. Cannonier against “Stylebender.”

So, while Jon Jones could possibly spoil this middleweight title eliminator, there really are no bad options here. Let’s just hope the winner of Whittaker vs. Cannonier gets the next crack at Adesanya. For old time’s sake.