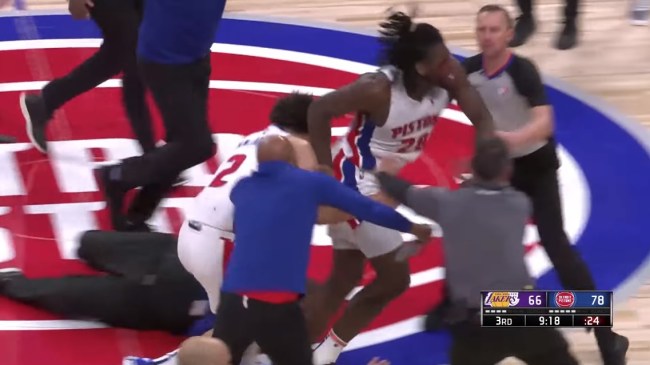 On Sunday, Stewart got heated with LeBron James after LeBron punched him in the eye when the two were boxing each other out for a rebound.

After the punch, an angry Stewart tried to run towards LeBron in an attempt to fight the Lakers superstar before being held back by several players.

Isaiah Stewart looked like a 5 ⭐️ running back out there #NBA #LeBronJames pic.twitter.com/y0EZlZpvNP

The video of Stewart trying to run up on LeBron became an instant meme on the Internet.

“Yo Zion dinner is rea-“pic.twitter.com/UKH6jL38ZW

Zion when he sees Gumbo pic.twitter.com/Aqck291jd3

T’Challa whenever he saw Bucky in Civil War pic.twitter.com/9AI1SDkwgt

me when someone says the office isn’t funny
pic.twitter.com/8iaYyZKv4s

Johnathan Taylor vs the Bills… pic.twitter.com/8zBpMSUDbl