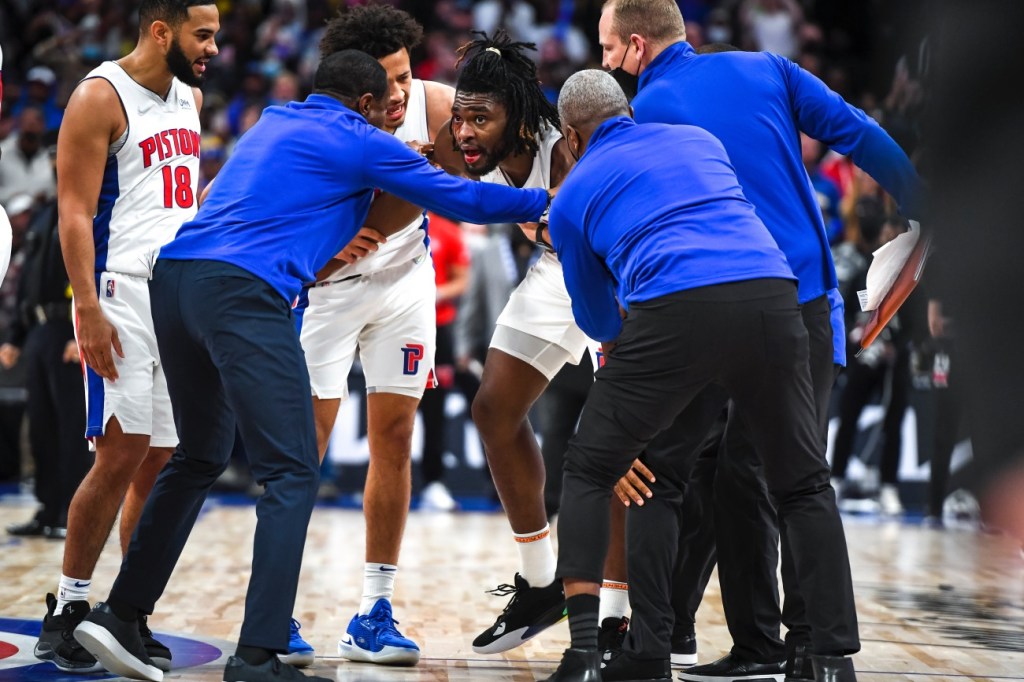 LeBron James was ejected from Sunday’s game against the Detroit Pistons after a violent and flagrant foul on Isaiah Stewart.

This was just the second game ejection for LeBron James in his career. But he got the boot after an ensuing brawl between both teams and the replay officials reviewed LeBron’s flagrant foul 2. Isaiah Stewart was also ejected for the ensuing donnybrook with everyone holding him back while his face was covered in blood from LeBron’s dirty foul.

LeBron James is one of the most polarizing athletes on the planet. I’d argue that he has more fans than haters but I might be way off in that assessment. One thing’s for certain, there was no shortage of SCORCHING HOT TAKES after LeBron’s disgusting foul on Isaiah Stewart.

The initial response from social media was to instantly turn Isaiah Stewart chasing LeBron into memes, then came the hot takes below. Here’s the initial foul and brawl if you missed it with the hot takes underneath:

Reactions on social media include:

Not just today but for years to come.

Not only should LeBron get ejected, he should miss 4-5 games.

Lebron should get 50 games

This is one of the hottest takes out there. ‘Pack your bags, you’re gonna be traded! Get ready for drug tests! LeBron is untouchable!’ Who believes this???

The Lakers are calling tonight an inspirational turning point in the season. REALLY??? LeBron shockingly and uncharacteristically cheap-shotted a 20-year-old, bloodying his eye, and got ejected — and that inspired the Lakers to fight back against a 4-11 team led by a 19-yr-old?

“Suspend everyone not named Lebron” pic.twitter.com/PWMhNaQ7Mo

Just walked by some middle schoolers playing basketball. One of them did a great fundamental box out and then got hit in the face by an opposing player. That player yelled “Lebron style!” While the other was gushing blood. Sad scene of today’s youth being badly influenced.

Some NBA cats go on fake, "Hold me back! Hold me back!" acts when the smoke hits the air. Isaiah Stewart was trucking cats like Billy Sims or Earl Campbell to get to LeBron. pic.twitter.com/kAGNBRMkxe

LeBron haters always sniping about LeBron not being hard enough sure are convinced this was an intentional blow to Isiah Stewart’s face.

This might be the worst take I’ve seen yet.

This type of tangle happens multiple times every game. 99% of the time you rip away cleanly from a tangle. This time LeBron didn’t. He’ll likely be suspended. But it’s not an intentional shot to the face. Accident. IMO. https://t.co/G6l9hpQADY

The more I watch the replays, the more I see relief on the faces of the Lakers after Pistons players and coaches finally subdued Isaiah Stewart. No Laker player looked like he wanted any part of Stewart's rage, starting with LeBron.

LeBron James was out there playing 4-D chess.

LeBron got ejected on purpose to inspire his guys.#Leadership

He would’ve been blackballed from the NBA

Mav Carter suspended him from Hollywood

Adele would write a song about him

Rich Paul would ensure he never had another agent

“Everyone in the league” doesn’t really align with how the Pistons are feeling today.

AD said the LeBron/Stewart interaction was routine at first, both guys battling for position. LeBron caught him w/one, quickly tried to apologize. "Everyone in the league knows LeBron is not a dirty guy.”

Davis said Stewart’s response was unprecedented since AD's been in NBA.

Based on recent history in the NBA, it looks like LeBron James will be facing a 2-3 game suspension for his flagrant 2 foul on Isaiah Stewart.

This was caused by LeBron James throwing a closed fist punch. You can watch the replay countless times and it’s as clear as day. So the league certainly needs to factor that in with handing out suspensions to LeBron and Isaiah Stewart as those suspensions shouldn’t be equal.