Isaiah Thomas Ejected For Going Into Stands And Confronting Fan Who Called Him A ‘B*****, The Fan Apologized And Said He Just Wanted A Free Frosty 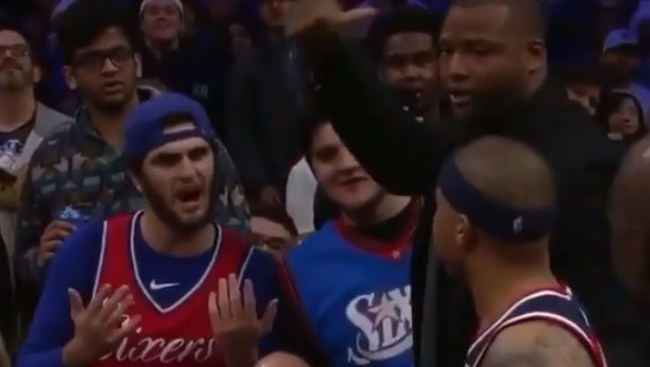 We almost had another Malice in the Palace situation in the NBA tonight all because of a free frosty promotion.

During tonight’s Wizards-Sixers game, Wizards guard Isaiah Thomas was ejected when he into the stands and confronted a foul-mouthed Sixers fan.

Isaiah Thomas goes into the stands to confront fan pic.twitter.com/QrPHcTLnIq

After the game Thomas spoke to reporters and said the fan yelled “fuck you bitch” three times after he made a free throw. Thomas says the fan later apologized and said he was angry that Thomas didn’t miss both free throws that would have given fans in the arena a free frosty from Wendys.

Isaiah Thomas said a fan gave him the middle finger with both hands and said, “F— you, b——“ after he made his second free throw. Said he calmly approached the fan to tell him to not to disrespect him. Fan said, “Sorry, I really wanted a Frosty.”