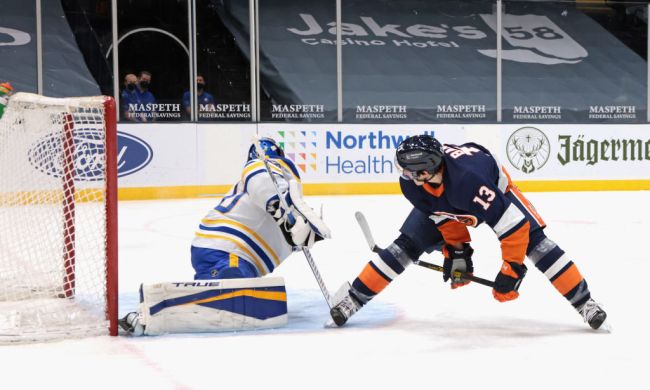 Mathew Barzal scored the Goal of the Year.

There is a lot of season left to be played, but it is hard to imagine that anyone will top what the Islanders center did on Saturday. Barzal won a race for the loose puck just beyond the blue line and shook off a defender in the attacking zone. By shook off a defender, I mean that he embarrassed Rasmus Ristolainen with his ability to stay on the puck. The Sabres defender has about 30 pounds and four inches on Barzal, so being able to hold him off is impressive.

What Barzal did next was sensational. He cut between the circles and faked a backhand shot before dragging the puck between his legs and tucking a goal inside the right post.

MAT BARZAL. GOAL OF THE YEAR.
END OF DISCUSSION. 🤯🤯🤯pic.twitter.com/Ba5qZOXzWy

The goal evened the score at 1 before New York pulled away with a 5-2 victory that cements their spot atop the Eastern Division. Four unanswered goals in the second period proved the difference, started by Barzal’s absurdity.

While there were no fans at the Coliseum, Barzal’s sorcery set the internet ablaze. It typically takes a lot for a hockey highlight to extend beyond “hockey twitter” in a large-reach capacity, but this did it. The goal was everywhere.

HOLY FUCKING SHIT MAT BARZAL WE ARE NOT WORTHY

MAT BARZAL BETWEEN HIS LEGS SOMEONE RESUSCITATE ME

My jaw is still on the floor from that Mat Barzal goal! Holy shit!

It was Barzal’s ninth goal of the season and by far the best of his career. He is on pace for 21 goals in this shortened 56-game season, which would put him on track for 31 in a full 82-game year. He is in the middle of a three-year, $21 million contract with the Isles and if he keeps scoring goals like this, he’s going to get PAID.