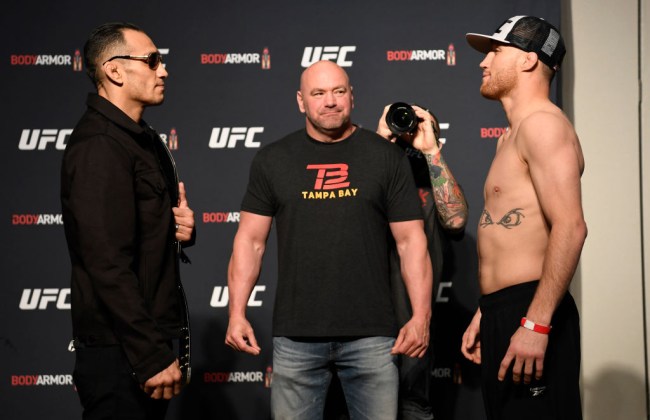 Of all the possible outcomes for tonight’s UFC 249 main event between Tony Ferguson and Justin Gaethje, a five-round decision is the least likely.

That is not to say that Ferguson and Gaethje won’t be prepared to go 25 minutes in their interim lightweight title bout, but looking at the styles and skill sets of these two fighters, it’s a near certainty that this fight will end before the final bell.

It’s nearly unimaginable that any single human being can withstand the punishment that these two masters of violence dish out over the course of five rounds. Then again, Tony “El Cucuy” Ferguson and Justin “The Highlight” Gaethje are closer to superhumans than the mere mortals who will tune in to watch this fight on Pay Per View.

Understanding that one man must win, and the other must lose, it’s time to take a deep dive into the UFC 249 main event. It’s time to take a closer look at two of the UFC’s most naturally gifted finishers, fighters who are known for knockouts, submissions, and some of the wildest action to grace the Octagon.

Anyone who has been following the UFC for the last few years should already be familiar with Tony Ferguson and Justin Gaethje. Both fighters have established themselves as fan favorites, delivering blistering performances that usually end in bloody and stunning knockouts.

Ferguson and Gaethje don’t just have the entire, well-rounded MMA skill set, they’re fighters who are so creative that they bring new techniques, styles, and gameplans into the Octagon with every ensuing bout. They’re also not afraid to step into the line of fire and absorb a few shots before dishing out some punishment of their own.

It’s a perfect recipe for action, entertainment … and blood.

For Ferguson, in particular, bloodlust is a running theme of his record-setting 12-fight win streak. Undefeated since 2012, Ferguson has thrashed a succession of opponents in such a masterful manner that his last two victims, Donald Cerrone and Anthony Pettis, were not only unable to continue after the second round, but they needed to be saved by the cageside doctors and their cornermen, respectively.

Battering and tattering Cerrone and Pettis with punches, kicks, and his signature slicing elbows, Ferguson is more than just a creative striker. He’s also synonymous with the M’arce choke, a modified version of the D’arce choke that he transformed into his own signature technique.

Ferguson is one of those fighters who sets his submission up with masterful work on the feet. Then again, he’s such a threat on the ground thanks to his unorthodox jiu jitsu and national champion-level wrestling that Ferguson can finish the fight anywhere it goes. Heck, he even dives into danger, doing those zany Imanari rolls, and adds dashes and doses of old school Kung Fu, throwing in some Wing Chun for close range striking, all while breakdancing around the Octagon. It’s an incredible offensive arsenal unique to mixed martial arts.

However, for all his strengths, Ferguson also has a tendency to take some damage himself, which is where Gaethje presents a myriad of problems.

Watching Ferguson’s old fights, it’s impossible to ignore his propensity to eat shots, and suffer the occasional knockdown. He tends to come from behind, but against Gaethje, that may not be an option.

Gaethje is a high-performance hard charger who storms out the gate with punches that will ultimately be described as “carrying bad intentions.” He also slams some of the most vicious leg kicks in all of mixed martial arts, whipping his shins around so fast and heavy that he’s finished more than one opponent with the technique.

Known for his knockout power — Gaethje has 18 KOs in 21 career wins — “The Highlight” is also an adept wrestler, earning All-American honors during his collegiate days. Much like Ferguson, Gaethje presents issues anywhere the fight can go. He also favors offense over defense, going balls out with the heavy hands and thunderous kicks, although the forward pressure can occasionally put Gaethje in trouble, as he’s tends to get hit more than his MMA peers.

Examining the Ferguson vs. Gaethje matchup is particularly interesting because of how well matched they are and how similar their skill sets are. In some way Ferguson and Gaethje perfectly complement each other; however, this is MMA, not math, and in this case the complementary nature of their shapes fit together in sheer chaos, rather than harmony. Yes, chaos, controlled chaos, may be the best way to describe this matchup.

Of course UFC and MMA fans will tune in for this bout, but this might just be one of the best possible matchups from an entertainment standpoint that the UFC can promote. Both Ferguson and Gaethje are showmen and performers who do more than just fight. They entertain, and that’s exactly what going to happen tonight in the Octagon at UFC 249.