How To Watch UFC 249 On Saturday via ESPN+ Because… SPORTS ARE FINALLY BACK! 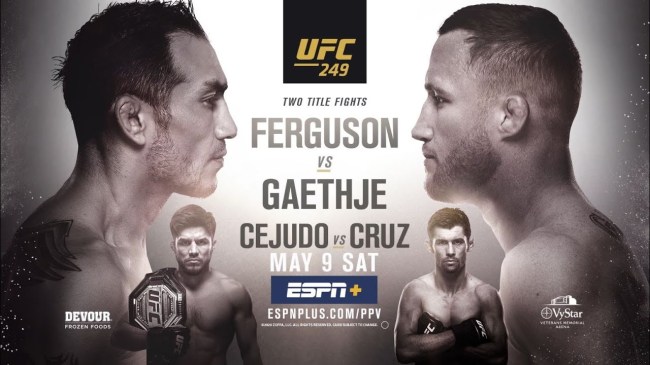 Ladies and gentlemen, this weekend, SPORTS ARE FINALLY BACK!

UFC 249 is happening this Saturday, May 9 at 10:00 p.m. EST from VyStar Veterans Memorial Arena in Jacksonville, Florida. After two months of sheltering-in-place and no live sports, Dana White and the UFC put together a monster fight card exciting enough to get any sports fan geeked up.

And ESPN+ is the only place to stream the UFC 249 PPV.

The original UFC 249 card, scheduled for the Barclays Center in Brooklyn, was set to feature a UFC Lightweight Championship bout between the current champion, Khabib Nurmagomedov, and former interim champion Tony Ferguson.

Then the world shut down and the event was canned while Dana White started planning for a Fight Island to hold UFC events in during quarantine orders. Now the concept is rumored for June for a Conor McGregor vs. Jorge Masvidal megafight.

UFC 249 will take place without fans in an empty area, with an absolutely stacked card featuring Ferguson vs. Gaethje. To say it’s going to be a real knockout of a fight is an understatement — and don’t miss the return of live sports on ESPN+.

Ferguson vs. Gaethje. is the fight that everyone’s talking about, worth the price of the PPV alone. Don’t miss the rematch between Donald Cerrone vs. Anthony Pettis in the prelims. Our own Dan Shapiro is excited for Carla Esparza vs Michelle Waterson.

In an interview this week, Esparza told BroBible:

“This fight is huge in a lot of ways,” added Esparza. “I think because it’s the first one back, people are gonna be hungry for it, and I’m excited to put on a show for everybody because it’s been rough out there.”

For those mega UFC fans, remember that ESPN+ is the exclusive home for all the action inside the Octagon. So, if you’re already planning on watching UFC 246, you might as well score yourself all the dope content the streaming service offers. Here’s a quick glimpse at the programming on ESPN+ that you’ll get to watch all the hard-hitting action.

Remember, a yearly plan of ESPN+ with UFC 249 is only $84.98, so now’s the time to get yours so you never miss any of the top-notch UFC or sports content always available at your fingertips.