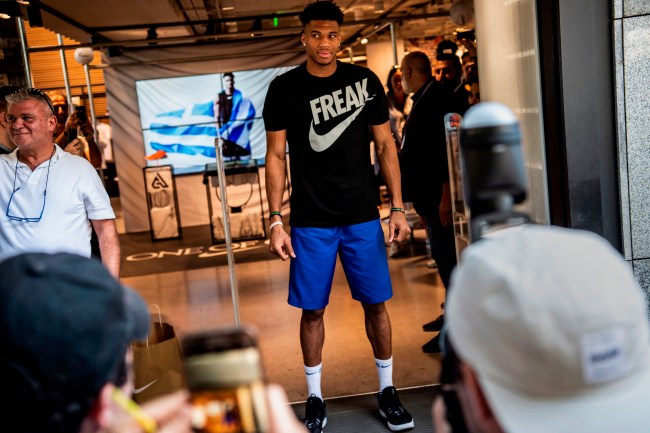 Giannis Antetokounmpo is one of the biggest athletes on the planet, and he hasn’t even totally reached his full potential yet; which is terrifying for opponents. Coming off a season in which he led his Milwaukee Bucks to the best record in the NBA, the “Greek Freak” was recognized by taking home his first ever league MVP award. To say that the 24-year-old has arrived is an understatement.

With Giannis’ star power continuing to boom, a new show on ESPN+ is putting the spotlight on the superstar in the first episode of SneakerCenter, which focuses on sneaker lifestyle and culture across sports, entertainment and beyond as told by the athletes, artists, enthusiasts, and brands who power the movement.

Debuting with a special preview episode on Friday, July 12, ESPN+‘s SneakerCenter debut episode follows Giannis Antetokounmpo to his native Greece, where viewers get an intimate interview with the reigning NBA MVP as he shows off his homeland and breaks down details of his first signature Nike shoe that was recently released in June.

Giving full access to Nike’s release and production, the exclusive content is sure to show the inspiration behind all that went into Giannis’ shoe. Plus, with the full season of SneakerCenter not actually launching until the fall, viewers get a small taste of things to come months before the rest of the series is available for streaming in a few months.

In addition to the special preview of SneakerCenter, don’t forget that ESPN+ is also the exclusive home of UFC, streams live events and has original shows like Alex Morgan: The Equalizer and Detail with Kobe Bryant, among other exclusive series. So make sure to snag yourself an ESPN+ subscription to get all the original sports content.

With all the best UFC content, live events and original series to scratch your sports itch, ESPN+ is the spot to get it all. Plus, the fact that it costs just $4.99/month — or $49.99/year — is just an added bonus for all the sports nuts out there, so get your subscription today.