J. Cole Is Trying To Land An NBA Contract Even Though He Hasn’t Played Competitive Basketball In Over 15 Years 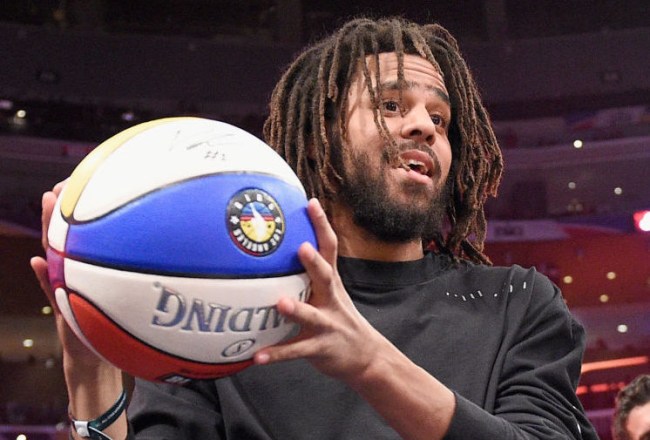 In 2019, the world was treated to the fifth studio album from *2 Chainz voice* 2 Chainz in the form of Rap or Go to the League, a title that refers to the mindset he and many others who’ve grown up in underprivileged areas had when it came to the routes they could take to avoid having to turn to a lifestyle that requires you to routinely violate federal laws.

The Atlanta-area native had already engaged in his fair share of illegal activity by the time he made a name for himself as a high school basketball player but took his first step down an alternative path after earning a scholarship to play at Alabama State. However, after realizing he wasn’t destined for the NBA, The Artist Formerly Known As Tity Boi decided to pivot to a career in hip-hop, which was a pretty solid move in hindsight when you consider he likely wouldn’t have been able to leverage his athletic abilities to purchase a Maybach with an interior that resembles an Ikea showroom.

2 Chainz isn’t the only rapper to follow a similar trajectory, as Cam’ron and Mase were high school teammates who showed a ton of potential on the court that was never realized due to the pesky academic standards that prevented them from playing college ball. With that said, the whole “music” thing worked out pretty well for both of them as well.

Anyone who’s seen the 2002 documentary Like Mike knows that no rapper has ever had a more formidable set of basketball skils (or a more magical pair of shoes) than Lil’ Romeo, who was only 13 years old when he made his NBA debut and somehow managed to convince the NCAA to let him play at USC after he graduated from high school despite seemingly obvious eligibility issues.

However, no one who’s best known for their contributions to the world of hip-hop has a more impressive basketball résumé than the father of that former Nickelodeon star, as Percy Miller—a.k.a. Master P—saw preseason action with the Hornets and the Raptors at the end of the 1990s but never played in a regulation game.

Now, Shaquille O’Neal may have released a platinum rap album less than two years into his professional career, but according to Master P, the NBA could soon be home to a rapper who went triple platinum with no features if J. Cole gets his way.

Last month, the man who held a basketball in his hand on the cover of the mixtape that served as his big break wrote an essay for The Players’ Tribune where he revealed he contemplated walking away from the game in 2014 and turning his attention to a new one by trying to make it to the NBA.

Cole got the opportunity to be a walk-on at St. John’s in the early 2000s but decided to focus his attention on music. However, it appears the dream hasn’t died entirely, and last week, he seemed to tease he’s gearing up to make a run.

Master P shed a little more light on the matter while talking with TMZ Sports and confirmed this is the case while sharing the words of wisdom he imparted on the 35-year-old, whose only NBA-related experience comes in the form of halftime shows and celebrity games during All-Star Weekend.

Master P said that J. Cole is really gunna try out for the NBA 😳🏀 pic.twitter.com/06t6G7K55N

“When I talked to J. Cole, he was like ‘You know, big dog you did it. What do you think I would have to do to make it happen.’ I said to get one of these NBA jerseys, it’s not gonna be easy. It’s gonna be a lot of hate, it’s gonna be a lot of people not believing in you, but you know J. Cole— he got the right size, he in the gym!”

Based on what we know about Cole, I’m kind of shocked he’d want to play a team sport as opposed to one where he can’t credit himself for all of his success, but I’ll be even more shocked if he can pull this off after going over 15 years without playing competitive basketball.