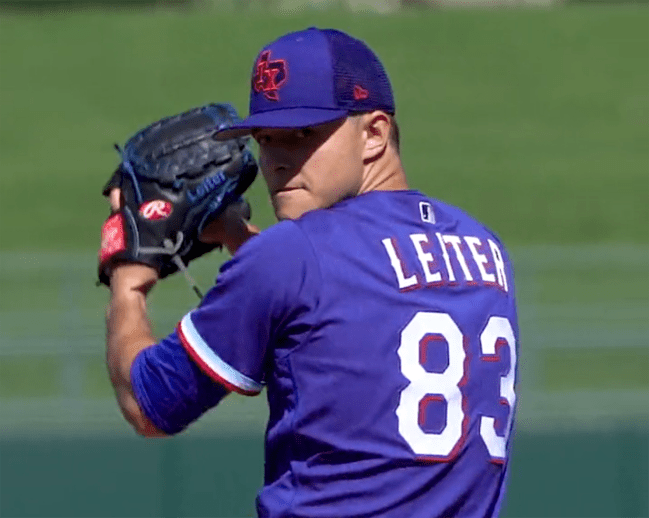 Major League Baseball is back and the Jack Leiter hype is very real. Leiter, a 6-foot-1, 205-pound righty was the No. 2 overall pick in the 2021 MLB Draft and the expectations for him to blossom into a superstar starter are extremely high.

Because he is not on the Rangers’ 40-man roster, Leiter has been in Arizona for spring training for a few weeks. He was pumping gas in the first video of him throwing in a Texas uniform and looked as-advertised in his bullpen sessions.

Leiter is going to be very, very good. It might take a year or two for the former Vanderbilt Commodore to reach the major leagues, but when he does— look out.

A POV video of Leiter’s fastball went viral last spring and it looks terrifying. Now, a year later, one of Leiter’s off-speed pitches has made its way across the internet and has set the baseball world on fire.

The video, also from a first-person, hitter’s perspective, shows Leiter’s changeup cross the plate in slow-motion. It is so gross.

The pitch begins in the upper left corner and then the floor falls out as the ball finishes in the lower right corner. Take a look:

Trying to get a swing on a changeup like Leiter’s is remarkably difficult. Couple that with his curveball, slider, heater and cutter and it’s damn near impossible to hit him, as exemplified during his dominance on the collegiate level last season.