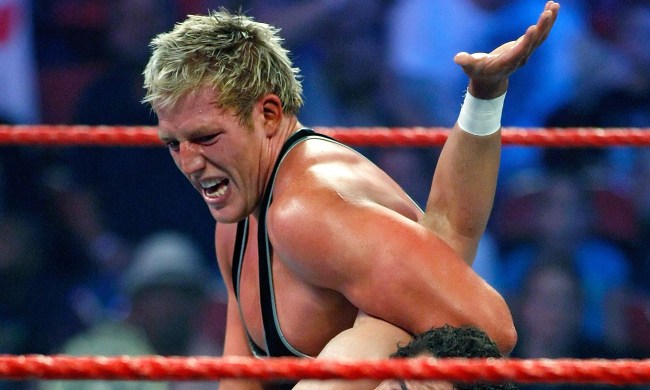 In case you were not aware, ex-WWE Superstar Jack Swagger, real name Jake Hager, is actually real-life tough guy. And he’s about to prove after signing a three-year, six-fight deal with Bellator MMA.

Hager, now 35, officially left WWE in March of 2017 after working for the company for over 10 years. In his time with WWE, Hager won the World Heavyweight Championship, ECW Championship, United States Championship and Money in the Bank.

However, it is Hager’s credentials that he forged PRIOR to joining WWE that are what he will be relying on as he follows Bobby Lashley, C.M. Punk and Dave Bautista from pro wrestling to mixed martial arts.

While at the University of Oklahoma, Hager was an All-American in wrestling and set the school’s single-season record for most pins in the 285 pound weight class. It was those skills that led Hager at one point to pitch the idea of doing a shoot (real) fight to the WWE.

Speaking to MMA Fighting, Hager explained what went down…

“For the longest time there, I felt like I was literally the toughest guy in the locker room,” Hager told Ariel Helwani on a recent edition of The MMA Hour. “Yet, I would go out there and have two-minute matches with guys that couldn’t hold my jock. It even got to the point where I pitched to them, I was like, ‘Look, I got something to prove. You guys are a great platform. Let me prove it. Pick the fighter — I’ll fight anybody. Put them on your show and I’ll fight them.’ They didn’t really want to go down that route.”

Unfortunately, WWE decided against it and now Hager will be doing it for real, only with Bellator and not WWE…

“Let’s do something different, along those lines,” Hager said of his shoot fight pitch to WWE. “I don’t know if they just didn’t believe in my abilities, but now we’re here to show it. It’s crazy. Stuff like that always happens and it just got pushed to the side and I was like, Alright, well I’m still here. I’m gonna do do it. It’s a great opportunity that I’m gonna take advantage of.”

Hager, 35, said he and his manager Daniel Rubenstein, a fellow Oklahoma graduate, reached out to the UFC, but they felt all along that Bellator would make the most sense.

“We reached out to the UFC, but in our heads the whole time Bellator was the end run,” Hager said. “That’s where we wanted to go. Like I said, they just seem like a company that values its talents and its assets. I think it’s on the rise. You see what Bellator is doing, with the roster that they bring in. Not only at heavyweight, at all weights. It’s really becoming great and tough all the way through. It’s very exciting to be a part of that.”

Hager says the plan is for him to make his MMA debut in April or May and it currently training at the Ybor City Jiu Jitsu Club in Tampa.

He also plans to continue in professional wrestling, only on the independent circuit and not WWE, where there seems to have been some friction.

“You can just see how certain people get treated up there. It was crazy. Are you serious? So it was just time to move on. Just excited for the first time in a decade, my hard work, my dedication will directly pay off to my results.”

As Hager also says in the interview, there are “certain types of guys that just need to be punched in the face, want to taste blood. And I think I’m definitely like that.”

One thing’s for sure, he is definitely going to get to “taste some blood” now.

Check out the entire fascinating interview below…