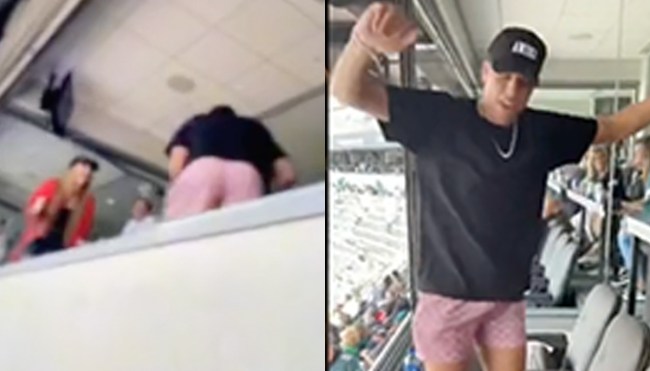 Over the past couple of years, TikTok has become the social media platform of choice for The Youths with an absolutely insatiable appetite for videos of teens lipsyncing to pop tunes and clips of people in compromising situations while that “Oh No” song plays in the background.

However, based on the admittedly little I know about the intricacies of the app, there’s no better way to go viral on TikTok than posting a video of yourself performing a choreographed dance to the most recent track to take the world by storm.

Jackson Mahomes may not possess the athletic talents that led to his brother Patrick securing the largest contract in NFL history after becoming one of the most dominant forces in the league, but he has managed to ride the quarterback’s coattails on his way to racking up almost one million followers on an account that is best described as “the pure distillation of TikTok.”

Jackson’s tendency to get his TikTok on whenever he’s in attendance at a Chiefs game got him in hot water earlier this year when he was captured dancing on an on-field memorial to Sean Taylor.

However, over the weekend, another video from earlier this season became the focus of attention courtesy of an Eagles fan who spotted Mahomes getting his dance on in a luxury box at Lincoln Financial Field when Kansas City faced off against Philadelphia in October and proceeded to film an exclusive behind-the-scenes look.

GUYS WERE ALMOST AT 1M

We truly live in the strangest of times.