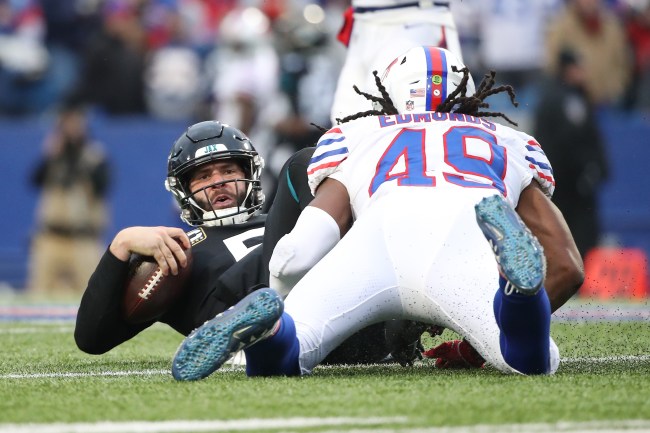 The Jacksonville Jaguars are having one helluva pathetic 2018 season so far. After reaching the AFC Championship Game last year and getting off to a 3-1 start this year — which included a win over the New England Patriots — the Jags have lost seven in a row, and currently sit at a paltry 3-8 overall. Yep, it’s sad times in Jacksonville.

Given the poor record, someone had to be the scapegoat, and that man ended up being Offensive Coordinator Nathaniel Hackett, who was canned today with his side of the ball just incapable of generating much of anything. No, seriously, the Jaguars are 21 of 32 teams in total offense, and are scoring a minuscule 17.9 points per game, which is good for 28th in the league. So, yeah, something had to give.

Thing is, many people think that Hackett wasn’t really the problem at all, but the quarterback, Blake Bortles. The joke over the past few years is how miserable Bortles has been under center, with fans and media when the Jaguars are going to get rid of him. Following the dismissal of Hackett, and the team keeping Bortles, it was fun to see how Twitter reacted.

When you no longer have to call plays for Blake Bortles on Sunday. #Jaguars pic.twitter.com/iFWhxciNl7

Must be his fault that the front office brought back Bortles. https://t.co/0SqCC4ZWsx

#Jaguars picked the wrong scapegoat. Hackett is one of football's most respected offensive minds.

The problem is not the OC

The Jaguars, who have arguably the worst quarterback in the NFL and an underperforming defense that looked unprepared against the Bills, fire their offensive coordinator. I guess someone had to go. https://t.co/ArQbBQVS7b

Hackett the sacrificial lamb for a team that actively decided to keep Bortles as starter. https://t.co/ZrPXRk7OlF

Did they misspell Blake Bortles? https://t.co/LV8sHlip8r

Now the #Jaguars are in a precarious spot. No legit OC candidate will take this job if there’s still a mandate from the front office to play Blake Bortles. That’s career suicide. They don’t have any internal options. So they have to move on from Bortles to make a decent hire.

In a weird way, I feel kind of sad for Blake Bortles and the Jacksonville Jaguars. You know that feeling when you’re being the good guy in a relationship with a girl and just want to make it work so badly that you’re trying nearly everything? That seems to be what’s going on here, because the team is trying to commit and change for the guy, but he just doesn’t seem to have the skills to deliver. Yep, such is the sad situation in Jacksonville right now, where it’s no better than most of our dating lives.