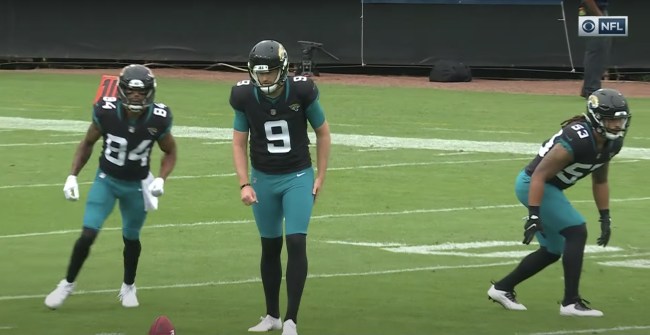 The 1-8 Jacksonville Jaguars needed every bit of help on Sunday as they faced the undefeated Pittsburgh Steelers. That included a bit of trickery. After knocking in a field goal on the opening drive of the game, head coach Doug Marrone dialed up an onside kick attempt. However, instead of letting kicker Chris Boswell give it a go, he called wide receiver Keelan Cole’s number.

I can't get over Keelan Cole almost successfully kicking an onside kick pic.twitter.com/7TQG66z5LS

Lining up as if it were a standard kickoff, Cole circled around Boswell’s back and topped the football to bounce it off the turf. The kick went the full 10 yards and almost landed right in the hands of the outstretched Jaguar’s arms, but the Steelers came down with the recovery.

The attempt wasn’t successful, but it was a creative take on the sneaky effort. Cole’s kicking debut came a week after he returned a Green Bay Packers punt 91-yards for a touchdown and shook J.K. Scott out of his shoes.

Jacksonville went on to lose both games and moved to 1-9 after losing 27-3 to Pittsburgh on Sunday.