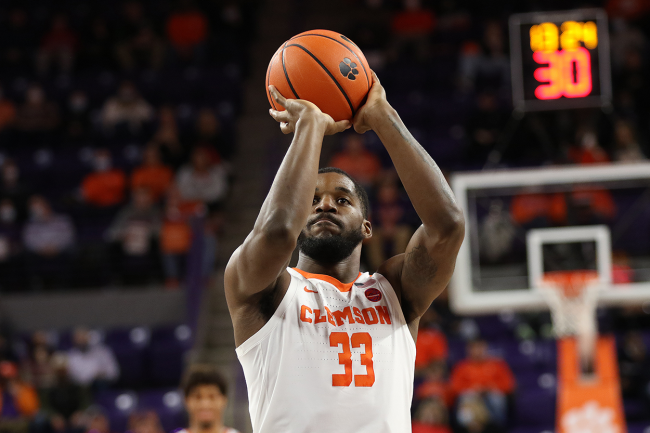 Naz Bohannon has not played football since his senior year of high school, but that isn’t stopping him from pursuing a career in the NFL. Earlier this week, he signed with the Jaguars as an undrafted free agent.

Bohannon, who stands 6-foot-6, 232 pounds, spent the 2021/22 college basketball season with Clemson after four years at Youngstown State. His frame and size sets him up to be a tight end on the next level and he is not unfamiliar with the position.

As a two-sport athlete in high school, Bohannon played on both sides of the ball and piqued the interest of a few power five programs. In particular, the Ohio-native received offers from Michigan State, Ohio State and Pittsburgh, among others as a defensive end.

Ultimately, Bohannon chose to play basketball for the Penguins. In his four years with YSU, he was a 1,200-point scorer and finished 10 boards shy of 1,000 rebounds.

Naz Bohannon with another double-double this afternoon 4 Youngstown. The SR. scored 23PTS & added 10REB in the W.
6’6 F is a load to handle on the glass & as a playmaker. He finishes at a high level around the rim & his off-ball movement constantly shows. @YSUMensHoops @NXT1S pic.twitter.com/JYyiYO8FTy

After finishing out his time in Ohio, Bohannon transferred to Clemson for his final year of eligibility and averaged 5.7 points and 4.0 rebounds in his lone season with the Tigers. At that point, he was offered an opportunity to pursue a professional career…

Naz Bohannon then declared himself eligible for the NFL Draft shortly after the college basketball season ended.

Since deciding to pursue a career in the NFL, Bohannon has been working out to get himself ready. He said that once he got back to the footwork and mechanics, it all came rushing back to him.

Over the course of the last month or so, Bohannon has done everything he can to get on the radar of NFL organizations. Without any tape, it’s hard to take a chance on someone who hasn’t played football since high school.

To do so, he has shot video of himself running routes, getting after it in the weight room and working through footwork drills. After playing the 2021/22 season at 225 pounds with Clemson, he is up to 240 pounds through his workout routine and a 5,6000-calorie per day diet.

In the end, it was Jacksonville that decided to take a chance. As things currently stand, the Jaguars have four tight ends on the roster but did not draft anyone at the position this year.

Bohannon has a lot of work to do if he wants to make the 90-man roster, but he has the intangibles to carve out a career if he can continue to improve and grow. He is not the only college hooper to pursue a career in the NFL this year, as Arkansas’ Trey Wade and Texas Tech’s Marcus Santos-Silva are doing the same.