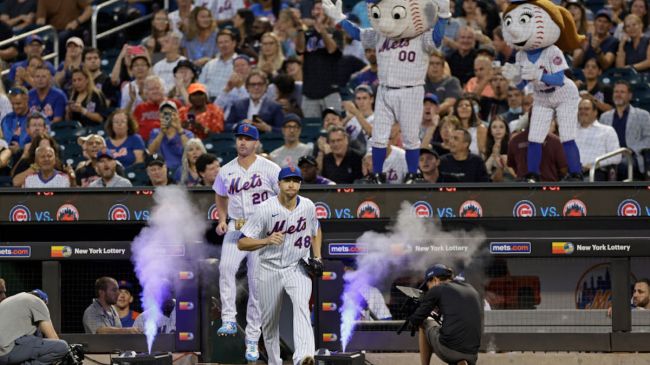 With about 20 games left in the 2022 regular season, the New York Mets — seeking their first postseason berth in about half a decade — currently hold a razor-thin half-game lead over the defending World Series champion Braves. That lead would’ve remained 1.5-games, however, the Mets failed to beat the struggling Chicago Cubs at home on Tuesday night despite the fact that they have Jacob deGrom on the hill.

Speaking to reporters following the game, deGrom — who, in an uncharacteristically average outing, gave up four hits, three runs, and one home run in six innings pitched — took the blame for the loss and put the result squarely on his own shoulders.

Needless to say, given that deGrom — one of the best pitchers in the history of the sport — has been one of the franchise’s lost bright spots in recent years, Mets fans were absolutely not having the Cy Young winner’s attempt to take the brunt of the blame for the Mets floundering offense.

No sir it is absolutely not 🫡

if there wasn’t a DH, he prob would’ve given himself run support too

this is not his fault https://t.co/vtnJEIRf4C

Jake better not be taking a single ounce of blame for this loss https://t.co/kbEhynX3al pic.twitter.com/5s73Rmy9Rl

NO ITS NOT JAKE!!! THIS IS ON THE HORRID OFFENSE!!!! PLEASE PLEASE LEAVE US AND GO TO A TEAM THAT WILL CHERISH YOU AND SCORE FOR YOU https://t.co/I3K3Eyioxj

1 ok start from you wasn't it! It was this teams offense sleeping like usual😤 https://t.co/iq7npQeByK

Jake is a perfectionist who is always taking accountability even when not warranted.

Terrible performance how dare he give up more than 1 run https://t.co/vuU17SBxhW

No Jake- thanks for manning up, but this is squarely on our feeble hitting lineup https://t.co/99AYFa5n7K

No Jake it was not on you , it was on the anemic offense https://t.co/OoY9OdXj0m

After wrapping up their series with the Cubs on Wednesday night, the Mets will then host the Pirates in Queens over the weekend before heading to Milwaukee on Monday night.